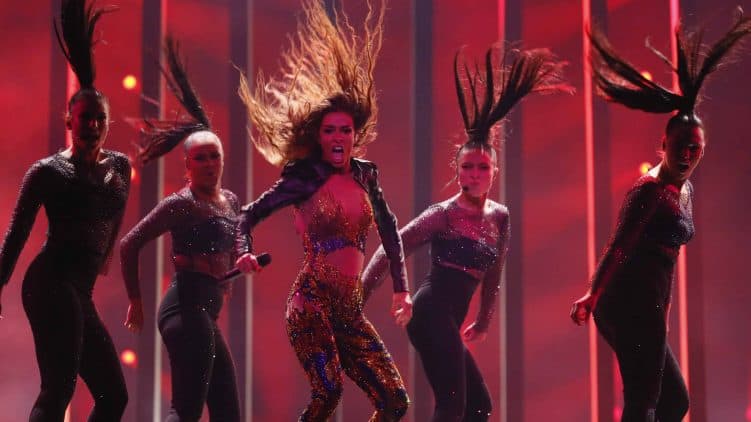 Cyprus: the queen of being underestimated

Every year it happens once or twice: everyone focuses on the highest ranked Eurovison entries in the bookmakers lists, almost blind-staring at just those favourites. Meanwhile, unnoticed and anonymous, one country slowly climbs up, step by step. First just a doubt, then just a song somewhere in the middle, then a likely ticket for the grand finale, an outsider, a dark horse, and in the end…? This year’s example must be Fuego (‘Fire’) by Eleni Foureira (Cyprus). Where has she been when we weren’t looking?

Detour
The queen of being underestimated, that’s a title Eleni Foureira can already sign up for. She has attempted to represent Greece at the contest three times in the past ten years. Three times someone else was chosen. For this year’s submission Cyprus actually had another contestant in mind: former winner and two time Eurovision-contestant Helena Paparizou, from Greece. Helena actually did record a demo of Fuego, but in the end turned down the offer. Eleni was second choice. Nevertheless the detour, Eleni is finally entering the Eurovision Song Contest.

Marathon
And surprisingly, for a second choice, Eleni is doing just great – in the Eurovision predictions, that is. At least much better than Greece, the country that didn’t believe in Eleni for all those years. But she who laughs last, laughs best: the video for Fuego was recorded at the city of Marathon… and yes, that is in Greece. It’s like a soccer player, forced to leave his club transfer free, and then becoming a word class player at the biggest competitor. Greece and Cyprus can’t really be seen as competitors though.

Visual contest
The one thing Cyprus shows us, is that Eurovision is definitely a visual contest. Stage directing is very important. It can lift up an average song. At an early stage the Cypriot delegation announced another cooperation with Sacha Jean-Baptiste, who, as an artistic director, contributed to the spectacular second place of Bulgarian Kristian Kostov last year. Two years ago, she already worked with the Cypriot entry Minus One.

Fire
Jean-Baptiste is very popular in Eurovision land. This year she has done the staging for four countries at the Song Contest: Australia, Armenia, Bulgarija and Georgia. For Cyprus she played an important advising role. For Fuego, visuals are essential: the lighting plan, all those well-timed flames surrounding the stage, the choreography. That is, by the way, one of the great qualities of Eleni: a really intense choreography combined with a steady voice and good articulation – how many times haven’t we seen artists stranding there? Eleni doesn’t, and that’s what makes Fuego a slowly increasing, slowly convincing fire.