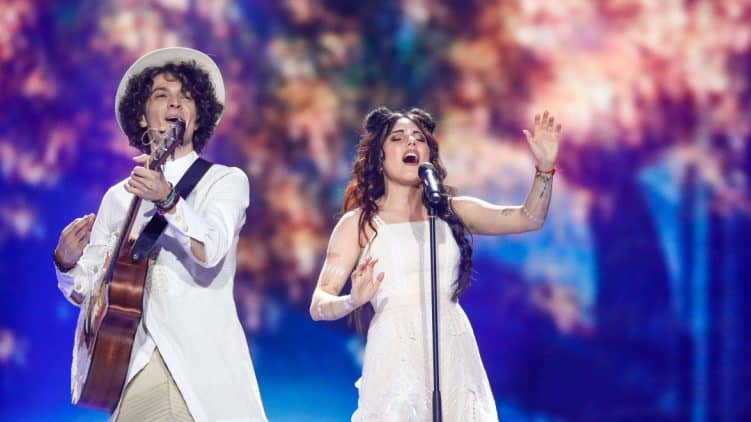 Naviband: We don’t like politics, but we can’t stay silent

More about Belarus More from 2017

It’s been six months since the Belarusian elections marked the beginning of a political uprising. Even Naviband, the Belarusian finalist of the 2017 Eurovision Song Contest, took part. Arciom Lukjanenka and Ksienija Žuk performed during the protests and their song, Devotsjka v belom (‘Girl in White’), about female protesters became a huge social media hit. Journalist and Belarus expert Franka Hummels spoke with Ksienija and Arciom on behalf of Eurostory. The story of this married couple echoes that of many Russians.

Silence
Arciom: It wasn’t a conscious decision to take to the streets, we didn’t really think about it. We saw some afwul things taking place, and we had no choice but to sing about them.
Ksienija: What you see is that many people who stayed quiet at first, have now decided to speak up after all.
Arciom: When you say nothing now, you support those horrible .
Ksienija: Such a silence raises many questions. Why are you quiet? Why do you choose not to speak out?  In our fast-paced times of social media and the internet everyone already knows what’s going on. It’s almost as if people who decide to remain quiet seem to believe that it’s none of their business…

With ‘those horrible things’ Arciom is referring to the massive police brutality, the arrests of random passers-by who are being thrown into vans by un-uniformed, masked men to be driven away to unknown destinations. To the rough circumstances in jailhouses where over thirty people are stuffed into jail cells meant for six, without food. To the way people are tortured.

Arciom: How on earth can we keep on singing about nature or beautiful people? We just can’t.

Politics
What about before all those ‘horrible things’? Were they against the regime even then? Did they stay silent?

Arciom: That is a very tough question. Previously, we were contained in our own, small world.
Ksienija: Somewhere in the middle.
Arciom: We didn’t care about politics. But now, we can no longer remain holed up inside our little world.
Ksienija: We’re still not political, as such. We don’t support anyone. Well, we support the people, for whom we want to keep on making music. We want to be honest, with ourselves and with our music.

And politics, by definition, isn’t honest – that is the vision that many Belarusians share, with a passion. In the eyes of many Belarusians ‘democracy’ isn’t the most important motive for turning against the regime. Their discontent began when presidential candidates for the opposition were getting arrested. People demanded political prisoners to be freed. When dictator Lukashenka (once more) wrongfully declared himself the winner of the elections, people took to the streets en masse. It wasn’t until the police responded with merciless brutality that just about the entire population began to protest the regime. In factories where Lukashenka had always been very popular, workers went on strike. Old ladies who used to believe very strongly that protests would only bring about more bad things, suddenly wanted to fight for the safety of their grandchildren. The situation was no longer seen as a fight between regime and opposition, but as a fight in which the state turned against its people.

Other contestants
Naviband’s Ksienija and Arciom are not the only Song Contest-related people who have openly turned their back on the regime. Evgeny Perlin, the face of the Junior Song Contest when it was held in Minsk, quit his job very soon after the elections. He did so, because he was also employed as a news anchor for the state-owned broadcasting network and disagreed with the state’s increasing influence. Other former participants such as Alekseev (2018) and members of Litesound (2012) also voiced their disagreement, spreading less strong statements through Instagram.

Language
Naviband took to the Kyiv Eurovision stage with Story of my life/Historyja majho žyccia, the first Belarusian entry that was sung in the Belarusian language. Many viewers at the time probably never realised how very special that was.

Ksienija: We were very surprised when the national finals jury chose us. Arciom had more faith in it than I did; I actually thought it was impossible.

The most important language in Belarus is actually not Belarusian, but Russian. Even though Belarusian is taught in schools, for a long time it was a language mainly used by farmers and oppositionally-minded intellectuals. They wished to emphasise that Belarus was more than just a former Soviet republic, that it was a country with its own identity and history, older, even, than that of its bigger neighbour to the East. Lukashenko did not share nor appreciate that sentiment. His regime glorified the Soviet Era and aimed for a close cooperation with Russia, as close as they could get.

This made using the Belarusian language far more ambivalent. In Minsk, the underground stations were announced in Belarusian, but if you used that same language above-ground, you might get spat on. The language was never forbidden, but it was also never accepted. Many Belarusian bands found themselves on a blacklist. For many years, people who wanted to attend a concert of Belarusian-sung music had to travel to Poland or Lithuania.

In the past few years, the relationship between Lukashenka and Putin soured. This gave Belarusians a little more room to celebrate their own history and traditions. Embroidered blouses – the very type that you now see in demonstrations and that Naviband has been known to wear – sold like hot cakes. Thousands of people registered to take language courses.

Ksienija: We’ve been singing in Belarusian ever since the band started, which was in 2013. We were both raised bilingual, so with a mix of both languages.
Arciom: We sing in Belarusian, because it is our own language. That’s the only reason for it.
Ksienija: We can’t explain why, but Belarusian is far more intimate. It helps our audiences really feel what we’re trying to convey.
Arciom: And it’s a beautiful thing to see that since the previous Summer, even more people are embracing our language.
Ksienija: Many artists are now creating beautiful things in Belarusian. Music is our language, for our people. Everyone is proud of our identity.

VAL
The question that now begs to be asked is: how do the candidates of the most recent years feel about the ongoing protests? VAL, the duo consisting of Vladislav Freiman and Valeria Gribusova that had been chosen to represent the country in 2020, expressed their wish to go to Rotterdam again. They did, however, ask the Belarusian organisation to be allowed to speak freely, not just to regime-approved media. They also didn’t feel much like showing up to hastily organized concerts meant to celebrate their dictator, but the organization pointed out their contractual obligation to do so. Their request to speak openly to whatever media outlet they wanted, was turned down. As if that wasn’t enough, their chance of participating was terminated, with the almost droll comment that they had ‘no conscience’. It is as yet unclear who will end up representing Belarus.

English
Ksienija: And now we’re also going to do something in English! Soon there will be an English cover of our song, ‘Girl in White’! We haven’t told anyone about that yet, so that is a special scoop for Eurostory. We’re recording this version together with a musician from Ireland who lives in Berlin. The production process is difficult now that we can’t be in the studio together, but it will be fantastic.
Arciom: Ryan O’Reilly is his name. He demonstrated in London in 2011, where he broke his hand during an encounter with the police. He understands what we are going through.
Ksienija: I think our song may get yet an extra layer of meaning in English. It could be of support to all women who are dealing with or have dealt with abusive relationships.

With this English-language version of the song, Naviband hopes to revive attention for the situation in Belarus. The couple is a little disappointed that the overall interest has waned zo quickly.

Ksienija: We talk about this with our international Eurovision friends from time to time. They know that there was something going on here last Summer, but they have no idea that the protests have never really ended. Of course, a demonstration is more difficult in Winter, but we’re preparing for Spring now. It’s not over yet.

Boycott?
The Belarusian Foundation for Cultural Solidarity, a group that was founded after the august protests, is campaigning these weeks against a Belarusian participation at Eurovision 2021.

What is their take on Belarus participating in the Song Contest in 2021?

Ksienija: We have mixed feelings about it. On the one hand, even in these strange times, the Song Contest is a good way to show the world what our country has to offer, culturally speaking. On the other hand, the act representing our country will be there on behalf of this regime. It’s entirely unknown what will happen.

Would you consider participating for a second time? Perhaps under the historic white-red-white flag that was used during the protests?

Arciom: Yes!
Ksienija: That really would be a dream come true. But for now, it can only be a dream.

Franka Hummels is a historian and freelance journalist. She lived and worked in Belarus and has written De Generatorgeneratie, leven na Tsjernobyl (published in Dutch by Atlas Contact, 2011), a book on life after the Chernobyl nuclear reactor disaster.

Izhar Cohen: Many, many things happened