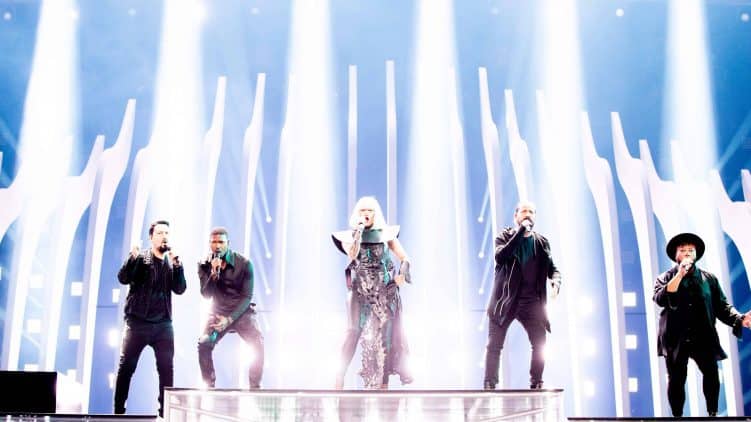 Tomorrow night, when the Bulgarian flag appears on the screen of many European citizens, five people will enter the stage. Four male, one female. Their song is dark and gloomy and pulls you into the pitch black of our universe. The song Bones will reach the finals on saturday and will undoubtedly rank high. But when Equinox enters the stage tomorrow night, pay attention to that one female. The woman that only starts singing when the song is halfway done. This is her resurrection.

Zhana doesn’t sing
Her name is Zhana Bergendorff. She is 32 years old and was born in Bulgaria. Her Danish name was given to her by her stepfather. Growing up in orphanages, her youth wasn’t very happy. Zhana became a singer. When she was eighteen, she moved to South-Korea to give her career in music a proper boost. For six years she lived there, when she decided to move to Denmark. It was there where she welcomed her son Leon. Zhana kept on singing, competed in the Danish X-factor and became the glorious winner in the Bulgarian version.

Then it all went sideways for Zhana. In an interview she tells the British website Metro: “After X Factor, I was introduced to a completely new and artificial world. I became the name on everyone’s lips, but I was totally unprepared for that. It reflected on my personal life, my family, everything. I became addicted to drugs, lost my home, ended up sleeping in my car. Honestly, I was in a position where I was about to give up. I had to fight the addiction but also with society’s prejudices. But I opened up about my addiction, and I hope I can encourage others to do the same.’

Last year Zhana made her comeback. She was asked to audition for the Bulgarian song contest band Equinox. ‘I really had to prove myself, and I am grateful that I have the opportunity to start a new chapter in my life. This opportunity comes after two extremely difficult years for me. Eurovision has put some order back into my life.’

Bulgaria: different direction
Simultaneously also Bulgaria, as Eurovision contestant, is rising from its ashes. Since its first partaking in 2005, the Bulgarian delegation with one exception never made the Grand Final. In 2013, after many disappointing results Bulgaria decided to withdraw from the competition all together. However, after a two year break, Bulgaria decided to go in a different direction: no more national preliminaries; candidates are selected via an open audition focussing on artists who can partially fund their participation; and national broadcaster BNT selects the final participant. From that day on results were spectacular: Poli Genova became fourth in 2016 and last year Kristian Kostov finished second.

Step by step
This year BNT again chose for an internal selection, but with carefully planned moments of transparency towards the national audience. In december thirteen selected numbers where chosen and announced. Eurovision fans, as well as non-Eurovision fans where asked to take seat in the jury that would eventually have a say in the final decision. At the end of January this jury chose Bones to represent Bulgaria in the song contest. The decision was announced in March. Everything carefully planned, step by step.

Equinox was assembled just as thoughtfully. Five islands, brought together from all over the planet to become an archipelago: Georgi participated in the Romanian X-factor, Trey is a singer-songwriter from Los Angeles, Johnny reached the semi-finales of America’s Got Talent and Vlado was one of the background vocals in the successful Bulgarian act of Kristian Kostov last year.

And then there is Zhana. First she stands on the side, then she moves to the middle of the stage. At the end of the song, when all the other singers are quiet and the music has faded, her voice is the only one remaining. The woman that kept silent and stayed the longest.

Cyprus: the queen of being underestimated