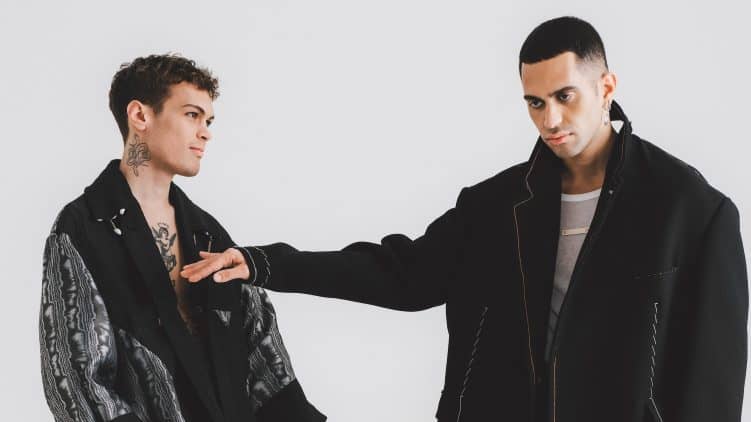 More about Italy More from 2022

Mahmood does it again.
For the second time in three years he has won the famous Italian Sanremo Music Festival and now, also for the second time in three years, he will make his appearance at the Eurovision Song Contest. This time, he won’t be going alone. He’ll be performing a duet with the young superstar BLANCO, and it’s a song full of shivers, Brividi – a song that instantly broke records, by becoming the most streamed Italian song on Spotify in one single day.
What is Brividi about? Why is the song so revolutionary? And what does it have to do with Holland?

First impression
What we hear is a chorus in which that single word ‘brividi’, shivers, is sung in a falsetto. Verses that take turns in sounding sad, endearing and angry. And furthermore: subtle piano accents, subtle percussion accents, and a large bed of violins.
What we see are two boys who perform a very intense song in strong and certain voices – without a dance routine, without an act. While the one sings, the other mimes the lyrics along, and at the end, fueled by adrenaline, they leap into each other’s arms.

Mahmood
For those who don’t know him yet: Mahmood is Alessandro Mahmoud, 29 years old, with a mother from Sardinia and an Egyptian father. He grew up in the multicultural but underprivileged neighbourhood of Gratosoglio in Milan. About the father who was hardly ever present, he wrote the bitter Soldi (‘Money’), which earned him second place at Eurovisie 2019, just behind Duncan Laurence.
But that was just the beginning. Next up were tours, even across Europe, and many more great hits such as:
Barrio (‘Neighbourhood’)
Rapide (‘Fast’)
and Dorado (‘Golden’).

BLANCO
BLANCO is Riccardo Fabbriconi (19), who grew up in a small village and dreamt of becoming a soccer player for a while, but who is now rising to stardom in the fast lane. In September 2021 his debut album Blu Celeste (‘Celestial blue’) became an immediate gold record in its first week, continuing onto platinum in its second, while occupying numbers one through ten on the singles hitlist.
Just like Mahmood, he writes his own songs and composes one hit after the other:
Notti in bianco (‘Sleepless Nights’),
Paraocchi (‘Blinders’)
and Ladro di fiori (‘Flower Thief’).

Father and mother
Mahmood and BLANCO met one other in producer Michelangelo’s studio. He was playing a little on his piano, and at some point missed a note. That ‘miss’ turned out to be a very positive and beautiful note, giving birth to the chorus of Brividi. In the weeks after that, the guys worked on the verses by themselves, with their own relatives as their audience. BLANCO’s father said: ‘This is the one for San Remo.’ BLANCO hesitantly texted Mahmood, who replied: ‘My mother said the exact same thing.’

To highlight the art of writing song lyrics www.eurostory.nl presents the Eurostory Best Lyrics Award – THE award for the best Eurovision song lyrics. This year’s award is won by Italy, by the lyricists of the song Brividi, Mahmood and BLANCO! This is Mahmood’s second win – in 2019 he got the award for the lyrics of his song Soldi. … »

A diamond bicycle (1)
Brividi, according to Mahmood and BLANCO, deals with ‘the fear of being misunderstood by another. The fear of wanting to love someone, yet always feeling like you’re doing the wrong thing.’ That tone is set by the first verse, sung by Mahmood, with a phenomenal opening line:
‘I dreamt of flying on a diamond bicycle with you.’
Followed by a message telling us that they probably won’t be flying any more:
‘You told me that you’d changed and I no longer see the light in your eyes.
What fear do you have?
A bottomless sea – even if sex isn’t the way to get away from the bottom.
Come on, don’t run away from here, don’t leave me like this…’

Wine in bed
The second verse is BLANCO’s, and his voice is supported by romantic strings. Deceptively so, because you can see how his words slowly move from nostalgia over into bitterness:
‘You, who wake me in the morning…
You, who soils the bed with wine…
You, who pierces my skin with those viper eyes –
you, you are the opposite of an angel!
And you, you are like a boxer in a corner!
You walk away and just leave me here, like this.’ 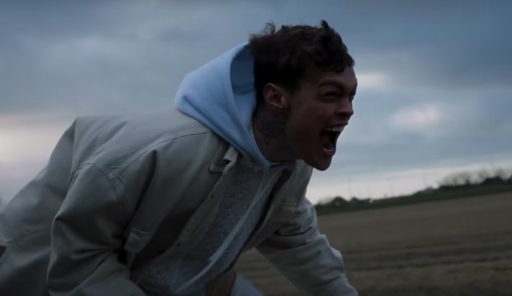 The poison
The second verse is followed by an even angrier segment, with BLANCO rapping the words and Mahmood singing them, taking turns:
‘Tell me that I’m wrong!
I live in a prison.
I try to stay close to you,
but sorry if that makes everything go to hell.’
and
‘I can’t tell you what I feel, this is my limit.
I’ve mixed drugs and tears for an “I love you,
but this poison that we spew on each other every day is no longer what I want.’

A diamond bicycle (2)
Apart from a few repetitions of the chorus, we now have the final and once again beautiful and meaningful sentences, providing a close:
‘As you can see, I am here, on a diamond bicycle.’
And the brilliant addition:
‘One of many.’
With those final short words (‘uno fra tanti’) Mahmood and BLANCO place the song in our hands. We, too, have wanted to ride a shiny bicycle with someone, even if that hasn’t always worked out. But, as they say, there are other diamond bicycles out there. That bike from the dream was one of many…

Windmills and houseboats
In order to make the dreamy imagery from the song come to life even more, for their video clip the singers have ridden on bicycles that were quite literally adorned with diamonds. And they ride them… in the Netherlands. Mahmood and BLANCO must’ve thought: bicycles? That means a trip to Amsterdam! And so they visited the country in December or January to be filmed whilst riding on the beach, along a long lane with windmills, through the Gorsstraat in Amsterdam West and in front of liquor store Late Night in the Sumatrastraat. Dinner was served by Crazy Kitchen and the drone equipment supplied by rental agency ’t Hekeltje. 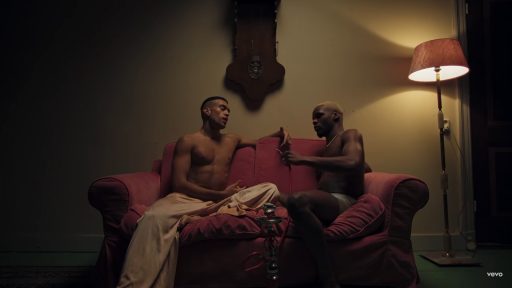 Nude (2)
The clip ends just as hopeful as the song: Mahmood and BLANCO ride off into the darkened sky on their diamond bicycles.
But before that, we’ve seen BLANCO lying on top of the piano (being played by producer Michelangelo) and we’ve seen Mahmood with a lover. In the bathroom, on the couch with a hookah,  always half naked, always at the end of a relationship.

Universal
And that brings us to what makes Brividi so revolutionary. That isn’t because of the fact that the song tells of a love between two men, or that it shows two men after sexual intercourse. The newness of it is that it doesn’t matter any more. That that isn’t what it’s about. The love shown in this video clip symbolises all of our loves, the diamond bicycle symbolizes the freedom in all of our dreams.
When Mahmood was asked what unites him and BLANCO (who has a girlfriend and who kisses girls in his own videos – okay, and one guy), his reply was: ‘The message of freedom. And the universality of that theme of being misunderstood.’

No specific pattern
Brividi by now has already conquered Europe and is, for many years in a row, another rich Italian addition to the Song Contest catalogue. A song that radiates a particular authenticity. A song that mixes classical Italian song elements with hiphop influences. A song that deals with a theme we all recognize, and yet is still so very much Mahmood and BLANCO’s own: two boys with dreams, who, in BLANCO’s words: ‘love the fact that they don’t follow the wellknown patterns in their heads’.

What happens next
Within ten days Brividi after its release became a platinum record, and the song immediately made it to the top ten of the American Billboard charts. Right before Eurovision it had almost 80.000 Spotify streams – more than any other competing song.
As for what happens next, BLANCO said in a recent interview: ‘Who knows what’s next. Maybe we’ll have a kid together?’
To which Mahmood replied: ‘Two, I thought? Or is that too many? Come what may – the future is full of surprises.’
Which could also be read as: there are many more diamond bicycles out there.