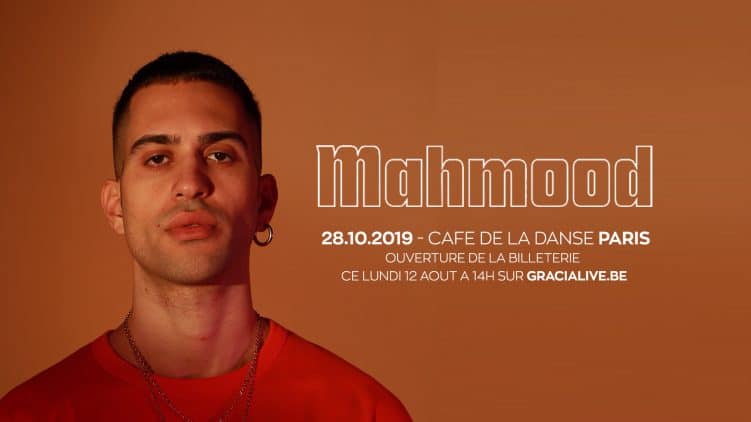 Reasons
There are many reasons to attend one of Mahmood’s concerts.
Here is a list:
– He finished second place at the Eurovision Song Contest, gave one hell of a performance, and his Soldi became the most-listened to Eurovision song on Spotify ever.
– He is handsome (no really, check his Instagram).
– As soon as you hear the rest of his repertoire, you cannot but be impressed, because almost every single song from his album Giovenú bruciata is spot-on, including the absolutely hip new single Barrio.
– He is a key figure in modern Italian music, connecting West to East and hiphop to the classical Italian song tradition, who wrote songs with and for big artists such as Marco Mengoni.
– And… the man’s got some serious style (side note: during his concert in London he wore a swaggy suit of armour and in Paris he dressed in knee-breeches with a sleeveless jacket and long coattails).

All very sensible excuses, but for Eurostory there is also an extra reason: Mahmood received our Eurostory Best Lyrics Award for the phenomenal lyrics to Soldi.

Surrounded
We could come up with a thousand reasons to buy a ticket to his show in Paris in October, in the somewhat damp Café de la Danse, a concert that sold out almost immediately, leading to the announcement of a second show that also sold out in no-time.

We line up outside the theatre. The queue stretches around at least two corners, which means that we’ve all been effectively surrounding the artist for an entire hour before the show, as Mahmood is probably inside somewhere, drinking water, cola or Red Bull.

We have to wait for quite a long time and are treated to a short DJ set before Mahmood (full name: Alessandro Mahmoud) with his three musicians jumps onto the stage. The crowded room dances along to the beat, and in the first half of his set (containing album tracks such as Mai figlio unico, Il Nilo nel naviglio and Remo) we’re getting an impression of the Mahmood in the standing-only-a-few-feet-away-from-us version.

And that impression is: loose.
Mahmood appears happier than during the Song Contest. In Tel Aviv he was mainly the professional artist, who now and then seemed to wonder where he’d ended up, but here he is a very cheerful, chatty guy who is clearly enjoying himself.

Once in a while he attempts a few words in French:
‘Bonsoir, bonsoir tout le monde!’, and a little while later: ‘Je suis… eh… à Paris, et demain… je dois… ehhh…’ – when he’s lost for words, he continues in English: ‘And tomorrow I have to go to Luxemburgo!’ 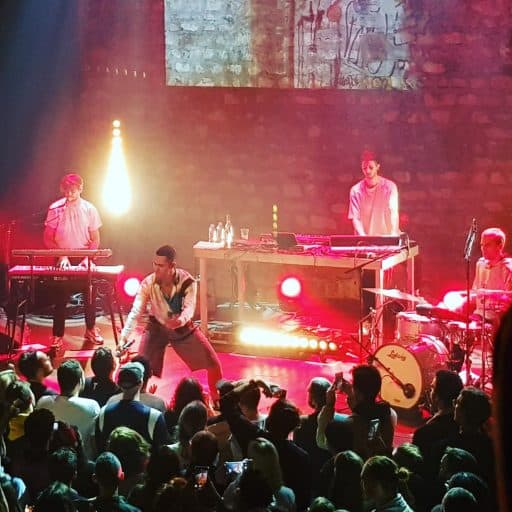 Crazy
He laughs at his bungling of the foreign language and says to the audience: ‘Why don’t you guys tell me something about yourself!’ When someone at the front is asked specifically and replies that she is from Milano, Mahmood replies: ‘Oh, Milano! I’m actually trying to buy a house there. But it’s difficult. Especially when you’re on the road a lot. I can’t fly out there just to go and have a look, but I’d really like to have a house there! Oh, wait, why am I suddenly sharing all this personal information with you?’ He giggles: ‘Sorry, I’m crazy. I’m fucking crazy.’

He performs Asia occidente and Good vibes, along with other well-known songs. There is no strict choreography, every now and then Mahmood dances a little, and there’s no coordinated background projection. All we see is some patterns and once in a while a few Pokémon characters.
The show does pack a few surprises, though. The first is a cover of a pop song sung in Arabic, Sabry ‘aleel (Sherine) and a little later on during the set Mahmood announces: ‘This is an international tour, so I’ve got to do something in English. Yesterday someone suggested: Toxic by Britney Spears.’ But that isn’t his choice for today. Which is, rather remarkably, a very tender version of that old, fragile hit by Simon & Garfunkel: The sound of silence.

Soldi
And then it’s time for Soldi. The audience is given a short instruction to clap along, but the word ‘Eurovision’ isn’t mentioned once. Everyone does sing along to every line, even the complicated longer sentences from the couplets: ‘In periferia fa molto caldo. Mamma stai tranquilla, sto arrivando.’ Right after the song, Mahmood comments: ‘It is fucking amazing.’

And then it’s time for the final song of the night: ‘This is one of my personal favourites.’
‘UramaKI!’ someone yells.
‘No, no,’ Mahmood says, ‘you need to pronounce it correctly: UraMAki.’ He runs up to the person he corrected to give her a high-five.
And then, indeed, music starts for Uramaki, and after a heartfelt  ‘Ancora!!!’ by the entire audience, one more for the road: Barrio.

Route
When we follow the other departing members of the Mahmood crowd outside, we ponder: after winning the Italian San Remo Festival and the Eurovision success, his quadruple platinum record for Soldi and a fast-growing fandom, one route seemed to be the most predictable for the artist: that of the god, the superstar, the goldrush.
It’s far more sympathetic that Mahmood – at least during this one concert – appears to be a happily surprised kid who has put all of the stuff from his youth behind him and only just got over the thrill and the applause from earlier this year.

The third shirt
This (transitory?) impression is confirmed when we walk by the small merchandise stand. In addition to a few shawls there are only three different T-shirts for sale. On simple hangers we see two pink shirts containing nothing more than the name Mahmood.
And then there is the third T-shirt, that says it all: black, no text, just a simple photograph of a boy. He isn’t even particularly excited or happy, but it’s the small Mahmood, about eight years old, who as yet hasn’t a clue that he will grow up to become someone who knows how to walk the fine thin line between pop star and storyteller.

Duncan Laurence: how it all began