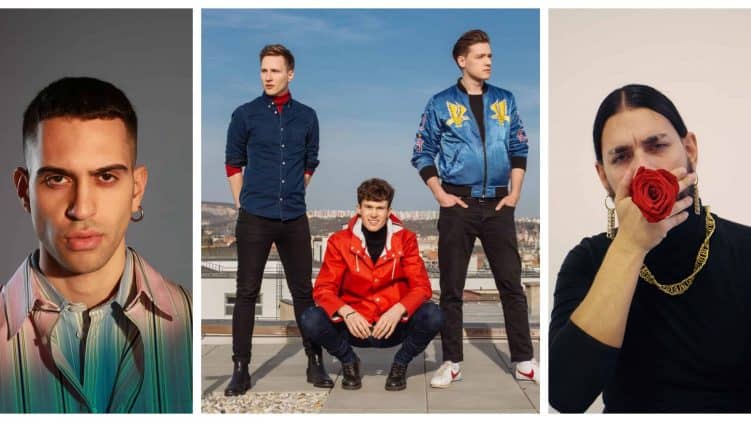 Which Eurovision 2019 song has the best lyrics?

Onwards! Onwards! Every year the Eurovision Song Contest is professionalizing a bit more. And we try to give a little push as well, by  crowning the best lyrics –

to the writers of which we hand (for the fourth year in a row) the Eurostory Best Lyrics Award.

but that was always for one sentence.

This year we are looking for the best full song lyrics. A small commitee of poets chose a shortlist, and these are the nominees (in random order):

Read below what the jury wrote about these entries. Voting
But now we need your help. What do you think? Which song – not counting the melody or the performance – has the best lyrics? Read what the nominators had to say and vote in our poll. The voting closes at May 10 4:00 p.m.

Besides the public vote there will also be a professional jury, that consists of a large group of Dutch, Flemish and international authors, journalists, publishers and ex-participants – those who work with text in their daily life. They will vote in the coming weeks, and right before the festival in Tel Aviv we will know the winner of the Eurostory Best Lyrics Award 2019.

Care to help us a bit?

‘The lyrics of ‘Soldi’ are painful and beautiful at the same time. A boy reflects upon his relationship with his father. He talks about the sweet things that the father used to say: (‘waladi habibi’, ‘my son, my love’). And about how he always used to ask his son: ‘How are you doing?’(‘Come va?’) But the father went his own way, leaving his wife and his young son and, years later, that ‘How are you doing?’ has become an empty question. Because what the father actually wants is ‘soldi’. Money. The lyrics touch in brief upon all kinds of nuances of anger and sadness. The writers, Dardust and Mahmood, have introduced a great deal of variety to the words. There are cinematic sentences that could have come straight out of a short story, such as the beginning with the shisha and with Jackie Chan on the TV. In other sentences, which are more like rap, the father is addressed directly (‘Dimmi se ti manco o te ne fotti, fotti’, ‘Tell me if you miss me or if you just don’t give a damn’). Another strong point is the little differences in the ‘come va’ lines, which mean that the story is told in a slightly different way every time. ‘Soldi’ gives us an insight into the lives of three people (father, mother, son) and is very real, powerful and full of despair, but even in the midst of all that rage maybe there is just a little hope too.’

More about Czech Republic More from 2019

‘Friend of a Friend’ is this year’s most tongue-in-cheek Eurovision song. It reads like one long excuse and is written from an original perspective. The tension of the song lies in what is not said. All that defensiveness naturally achieves the opposite effect: the more the protagonist tries to downplay his relationship with the girl who used to live next door, the more suspicious it all becomes. You could also see the girl from his past as a sort of ghost, maybe even just in his head. ‘Friend of a Friend’ is an ominous text that makes the listener curious. With a sly little kicker at the end as the new neighbour herself interjects in a seductive little voice: ‘I’m only a friend…’’

More about Portugal More from 2019

‘Songs are often based on rather hackneyed metaphors – trees, birds, sun, moon – but Conan Osíris has constructed his lyrics around a completely different symbol: mobile phones. This has not only given the Portuguese song the most original title of all this year’s entries, but also raised some very interesting and puzzling questions: What does that mobile phone stand for? Who is being ‘killed’ with it? What or who is being longed for? We don’t know, or rather: we don’t know exactly. And that’s great, because that’s how poetry works. A meaning is triggered within our thoughts, and we begin to find other associations. ‘Telemóveis’ sends us straight back to those times when our telephone brought us painful messages, messages that changed everything. How they changed our lives. Yes, Osíris keeps his lyrics open enough to allow the listener in – but he refuses to hand out easily digestible clichéd bites. Add to this the sensitive ending, in which the singer, in one simple sentence (‘fui eu’ – ‘it was me’) confesses that he was the one who shot the arrow – and you’ve got a great set of lyrics that have the capacity to keep on growing within our minds.’

The nomination reports were translated by Laura Watkinson.