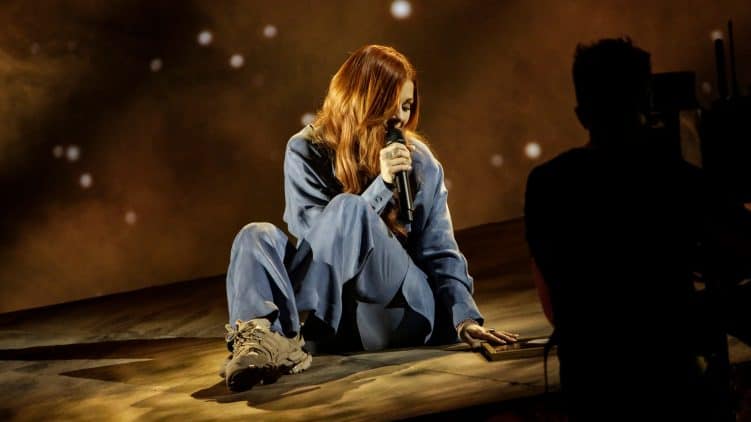 Bulgaria: the song that leaves us speechless

More about Bulgaria More from 2021

After sixteen performances in the grand final of 2021’s Eurovision Song Contest the lights go low. The spotlights find a girl who sits on the floor. Well, not exactly on the floor – rather on a rock rising up from the ocean. And well, a girl – rather a woman that came into adulthood during the one and a half year that she prepared herself for this moment. Growing pains, that’s what she is singing about. growing up is getting old by the Bulgarian singer VICTORIA is a song that, once the three minutes are over, leaves us speechless .

Who is she?
So, VICTORIA. In capital letters. The titles of her first EP, which was released in the build up to this contest, are all written without a capital letter. Why so? Because the songs don’t stand on their own, VICTORIA explains; together they tell one big story.

More about Bulgaria More from 2020 (Cancelled)

What story?
This is VICTORIA’s story: she is twenty three years old, last year she was twenty two years old, and had 2020’s Eurovision happened she might have been the winner. Her song Tears getting sober was one of the absolute bookmaker’s favorites. When the edition was cancelled, her song became a scar she preferred not to look at any longer. ‘I never sang it since, I couldn’t listen to it any longer,’ she said last autumn, at the point that she – thank heaven – felt comfortable again with making music.

Back in 2021
Bulgaria asked her to represent her country once again. Oddly enough, the quest for a new entry eventually brought her back to the first song she ever wrote, long before she even spent a thought on Eurovision. That’s growing up is getting old.

UPDATE: WE HAVE A WINNER! Check the video of the winner here. For the fifth time Eurostory will present the Best Lyrics Award, an award for the best song lyrics from this year’s Eurovision songs. Past winners are: 2019: Italy 2018: France 2017: France 2016: Ukraine As in previous years the winner will be chosen by a large international expert … »

What does she sing?
‘Playing Tetris with my feelings, tryna’ keep them all inside.’ That’s how the song begins, a song that is full of striking metaphors. No wonder VICTORIA got nominated for our Eurostory Best Lyrics Award for the best lyrics of this year’s festival.

Ocean
In three minutes the singer open and vulnerably explains the burden of carrying an ocean of loneliness, fear and panic in one’s head. You close the door and lean your back against it to keep the water inside, but it wears you down. But in the bridge of the song VICTORIA ponders: maybe one day I can open a door and tread the water, maybe it will hold me, maybe I can leave my worries behind.

In about every interview VICTORIA gave after the song presentation she emphasizes how personal this song is to her. ‘When I sing it, it reminds me of my parents, my sister, my friends – the people that are dearest to me. They are the ones I turn to when I try to understand the sense of me being on this earth.’

This picture of VICTORIA and her father will be beside her on the stage.

The photograph at the stage
In the run-up to Eurovision another dimension was added to the lyrics. Last year VICTORIA’s dad was diagnosed with the neuromuscular disease ALS. The 14th of December VICTORIA posted a photo on Instagram of herself as a little girl sitting on her father’s lap.

The same photo is now next to her on stage during her Eurovision performance. As VICTORIA gently touches the frame of the picture, the world is watching. She sings: ‘I’ve never understood how so much can fit in little me.’

‘This was a gift for my father,’ she told in an interview right after the first rehearsals, when the photo was shown for the first time. ‘He didn’t know I was planning this. I just heard he’s seen it and that he cried.’

What else do we see?
A bit further on in the song VICTORIA takes a few steps on her rock that floats on the ocean she doesn’t want to drown in. A new metaphor: sand trickles down from the sky, she walks towards it, but note: once she wants to touch the sand, it disappears. ‘It’s time running through our fingers,’ she explained in LookLab with NikkieTutorials. ‘The time you want to spend together, but it runs so fast you can’t keep track. This frustrates and hurts, but that’s okay. It’s okay not always to be okay.’

Panic attacks
And exactly that message will bring VICTORIA a high placement at Eurovision 2021. Because she is who she is: a vulnerable, openly worrying twenty something, who most of the times sings about insecurities, about gloominess, about mental struggles. Her first Eurovision entry was inspired by the sad fact that two young people from her team suffered from panic attacks and even had to go to the ER.

More about Netherlands More from 2020 (Cancelled)

Grow
And of all her competitors of last year VICTORIA loved Grow the most, the first Eurovision song of the Dutch singer Jeangu Macrooy. Why? Because it delivered a message of hope: that we grow because of the pain, and that there’s always a way out, as long as we are open about our struggles.

Speechless
The last lines of growing up is getting old could have been a verse in Jeangu Macrooy’s song. This is the core of VICTORIA’s message, and that’s why the music stops, that’s why the audience holds its breath as VICTORIA emphasizes every half-whispered syllable of her final lines:

If your world is breaking
and growing up is getting old,
know that you’re worth saving
and getting up is all you’ve got.