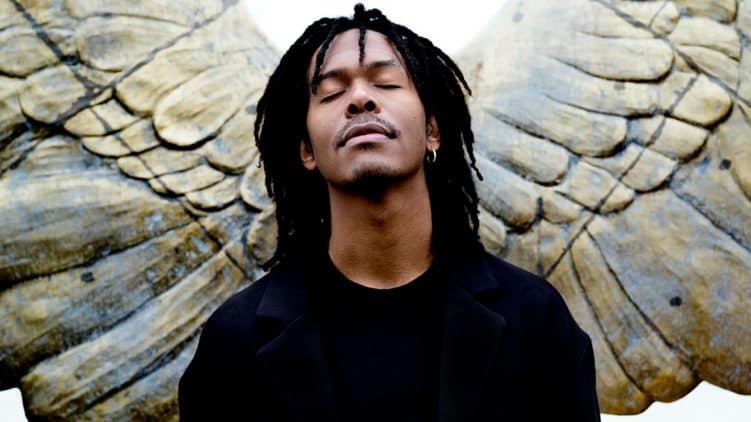 Jeangu Macrooy sings Grow in the finale of the Eurovision Song Contest 2020. It will be one of the most personal entries – this much is clear already. But what is Grow  about? What exactly is the narrative of this glowingly intense song?

Slide projector
The song starts with reminiscing. In the clip Jeangu lies down on a rigid wooden floor, his arm resigning on his chest, a bit further lie, tossed on the ground, some equally lonesome headphones. We hear a gentle click, reload. Click, reload. Click, reload. Do we know that sound? Oh yes, an oldfashioned slide projector – didn’t they go extinct in the early nineties?
Click, reload – it’s an intriguing sample. The edit jumps to the slide tray. To the white frames that are shoved into the machine one by one, showing us images of bygone days. Look at that slide: we see two little boys. Both of them are sitting – note that detail – on something that looks like a moving box. 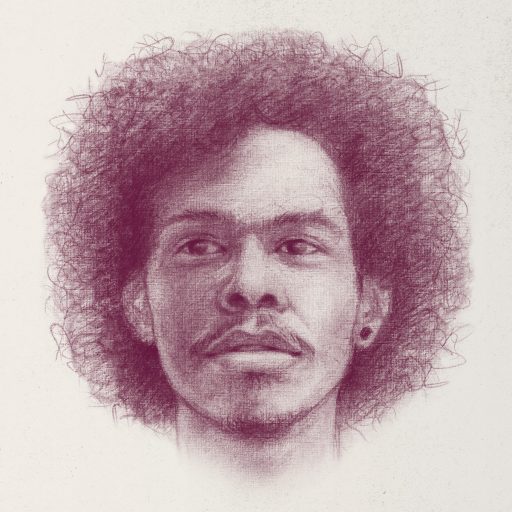 Self-portrait
Jeangu has sung the first line by now: ‘When I’m sad I am unreasonable – just like a little kid, mad at the world.’ A strong start. In the second line he develops the image. ‘When I’m alone, I’m defenseless, just like the boy I was, afraid in the dark.’
Those first verses are like the beginning of a story, in which we get to meet the main character and find out a bit about how he feels. The camera meaningfully slides over a note book, an old identity card photo and a self-portrait, drawn by  Jeangu – the exact same one he used for the cover of his first EP Brave enough. These images all together indicate Jeangu’s intention: this is a true narrative, in this song I’m being my most honest self.

When I’m sad, I am unreasonable, just like a little kid, mad at the world.
When I’m alone, I am defenseless, just like the boy I was, afraid in the dark.

Don’t take it personally, don’t be offended.
Don’t mind my mood changing like the weather.
God knows I tried to hold it all together.
Oh, I’m getting older and it ain’t what I thought it would be.

Wide awake, the planet spins around a little too fast for me, most of the time.
Lost control, my thoughts are flickering, just like satellites, lost in the sky.

Don’t take it personally, don’t be offended.
Don’t mind my mood changing like the weather.
God knows I’ve tried to hold it all together.
I’m getting older and it ain’t what I thought it would be.

One day I’ll find some peace of mind, and then I’ll stop being afraid I’ll make it through the night.

Portrait of us
But the funny thing about personal lyrics and personal songs is that they touch us more than general lyrics and general music. This is the sweet secret of art: if you get to see someone else’s heart up close it often resembles your own. In this way the next lines, those of the chorus (‘I’m getting older and it ain’t what I thought it would be’), are a wording of what we all feel at times: is this all?

Fizz
Because of the interviews he gave, we know a thing or two about Jeangu Macrooy. He grew up in Suriname, together with his twin brother Xillan. They paired up as a band that was gaining more and more success, but after a short stay in Amsterdam Jeangu knew that he had to leave behind his familiar surroundings, brother, relatives and career to find a new canvas to paint on. (Remember the detail on the slide, those moving boxes – a few years later Xillan did exactly the same!)
Jeangu collected money for his trip, he enrolled in the conservatory in The Netherlands, met the love of his life, also met  producer/composer/manager Perquisite, made his first albums – and everything fizzed, everything sprinkled, leading up to the zenith: this year’s Eurovision.

Planet
But that doesn’t mean every single second is equally blissful. And exactly that is the feeling we recognize. The stupid conclusion that there is nothing to complain about, and yet, (quoting Grow) ‘the planet spins around a little too fast’, leaving us with a sense of losing control. As a result we sometimes have to explain to lovers, friends and family that the fact that everything seems to go well on the outside doesn’t mean things go well on the inside.

Internal boy, external boy
This observation is beautifully depicted in the clip. Jeangu stands in front of the mirror (looking at the outside from the inside), but then he tilts the surface a little. Suddenly there’s another Jeangu. And while the beautiful arrangement piles layer upon layer we see the hesitating main character embolden, put on his coat and leave the house. This we recognize as well – right? Having an internal-self, that lies on the floor pondering, and an external-self that walks towards people’s eyes?

Way out
To articulate this, the music does something suprisingly splendid. The word ‘satellites’ breaks free from the melody, it’s sung in harmony and seems to open a porthole. In the clip Jeangu is looking up at exactly that moment. Upwards, outwards – a way out of all the brooding.

Arrangement
The brilliant find of singing this one word in a slightly different way indicates the genius of the song. It also draws our attention to Grow‘s subtle arrangement:
how from one solid note (at the start of the song) we progress to some well chosen undertones at the organ (at ‘personally’),
and then
(at ‘most of the time’) the humming backing vocals,
plus
(after ‘in the sky’) a rising note that lifts the song in a cinematic way,
until
(after the second chorus) a mini-break.
At the end of the song: community gospel-singing, a dark bass, driving chords and clapping.

Growing
In the concluding part it’s stated how we can get away from worrying with the help of other people. We see Jeangu walking through the night, on his way to find companionship. A bit later he’s with a group of friendly people (we certainly would love to join them). They talk, they listen, they laugh. What’s special: this part of the clip isn’t acted. Jeangu sang his song a capella in this group en then discussed the lyrics. These lysics say: ‘The more I learn, the less I know. Through every high and every low I’ll… grow.’

Surprising ending
So joyful: we want to sing along, we want to jump up, as in a church in the south of the United States, we want to testify that the only way to redemption is through others, through the community.
But Jeangu has a last trick. He quite abruptly breaks off the thankful gospel part. Suddenly we are at the end of the song, leaving the last word (‘grow’) hanging in the air.
In the clip we see the girl at Jeangu’s left putting her hand on his arm, and the boy at his right nodding at him appreciatively. But the last note, again, is lonely. As if Jeangu wants to tell us: in the end we will have to do the growing all by ourselves.

The best song
In Grow Jeangu Macrooy offers us not only his pain, not only his way out, not only his final conclusion, but he lets us feel things through the melody and the arrangement, while at the same time the lyrics make us think.
In an interview he stated: ‘This is the best song I ever wrote’. And because of how things come together in this entry, we can only affirm this judgement. Grow is exactly introverted and extraverted enough, and we haven’t even seen Jeangu’s charismatic live performance yet. Okay, okay, a bad spot in the performing order can still damage the song. But it doesn’t really matter. The Dutch song selectors saw it right: Grow is so truthful that losing isn’t even possible.