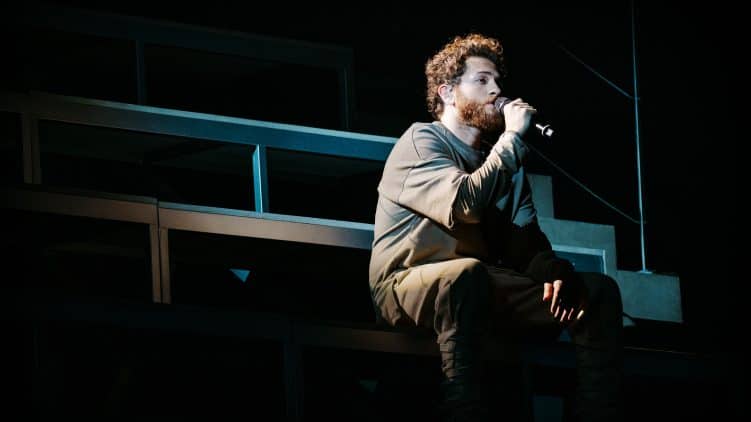 Azerbaijan: who’s competing in Eurovision, a, b, c, or d?

More about Azerbaijan More from 2022

You are, as you say, ‘born in music’. You’ve won all kinds of student festivals, you’ve even won The Voice. And then you hear, live on tv, via a painfully slow game, that you’re competing in the Eurovision Song Contest 2022 in Turin. That’s what happened to Azerbaijan’s candidate, the 22 year old Nadir Rustamli.

Millionaire
His full name is Nadir Rashid oghlu Rustamli. Or rather, in Azerbaijani: Nadir Rəşid oğlu Rüstəmli. And although his father is a doctor and his mother a teacher, the house was always filled with music. Nadir: ‘I sang before I could talk. I played piano before I knew what a piano was.’
And yes, he was put on the spot in a talkshow. He had to compete in a game of ‘Who Wants To Be A Millionaire’ – because it’s one of his favourite shows. But the question he had to answer was:
‘Who is our country’s entry for this year’s Eurovision Song Contest – a, b, c, or d?’
Next to answer d it said, in clear letters, ‘Nadir Rustamli’. Which answer should Nadir pick?
Watch below how difficult they made it for him – live! – and how, out of pure joy, he did not know what else to do except to start hitting his chair:

Nadir sings Day after day (Azerbaijan 2008) at The Voice.

Three side facts
Competing in Eurovision was a childhood dream for Nadir. He would watch every year and fantasize about being on that stage himself. As he grew up (loved sports, loved PlayStation, loved dogs and horses) there were plenty of, one could say, trial entries. In 2017 Nadir and his school class visit the Youthvision Festival: an international music festival in Azerbaijan primarily aimed at students. In the following year he competes in it, places third, and one year later he places first.
Side fact 1: at this time he’s also developing a professional swimming career.
Side fact 2: at this time he’s also studying tourism and management.
Side fact 3: at this time he also becomes front man of the band Sunrise, who sing Ukraine 2004’s winning song Wild dances in a TV show.

Nadir sings We could be the same (Turkey 2010) at The Voice.

Three The Voice Eurovision songs
In 2021 a friend signs him up for The Voice without Nadir knowing and later tells him: ‘They’re waiting for you.’ Nadir says ‘What??’ but eventually wins the whole show. His coach is Eldar, who himself won Eurovision in 2011. So it’s not surprising that the songs Eldar pitches to his pupil include Eurovision songs.
For starters: Day after day, the first-ever song for Azerbaijan at the Song Contest (2008).
Secondly: We could be the same by Turkish group maNga (second place in 2010).
Finally: Arcade by our own Duncan Laurence, from 2019.

An own song
But at the end of 2021, after the surprise on live TV, a song for Turin had to be found. More than 300 songs were sent in to the Azeri broadcaster, of which six made the shortlist. Two of them Nadir doesn’t like, the other four he loves. After recording them at the studio Fade to black feels best. Nadir: ‘It’s closer to my life, it’s so deep. Everything we experience will one day become a memory, and we need to leave the bad ones behind us  – only then can we move on again.’
Fade to black is about forgetting and fading out all memories that don’t feel good. With a key role for these lines:
It hurts so fast
when love goes bad
until at last
we fade to black.

Song writers
For the tenth time in Azerbaijan Eurovision history, the song is (co)written by Sweden. Only once was the entry completely local – in 2008, the first year the Azeri competed.
Fade to black comes from the hand of the team of Anderz Wrethov, who previously wrote
Azerbaijan 2009 – Always
Cyprus 2018 – Fuego
Sweden 2019 – Too late for love
and Sweden 2021 – Voices
and Thomas Stengaard, who previously wrote
Denmark 2013 – Only teardrops
Germany 2018 – You let me walk alone
Germany 2019 – Sister
San Marino 2021 – Adrenalina
and Cyprus 2021 – El Diablo

Little brother
Completely Azerbaijani, however, is the support Nadir received in the Eurovision week from Eldar – his personal coach in Turin. Nadir: ‘Eldar is more than a coach, he’s my friend, I love listening to his advice. And he sees me as his little brother.’
A little brother, thus, who is fulfilling his Eurovision dream with the help of the big brother, whose memories have already faded to black. Quite beautiful.