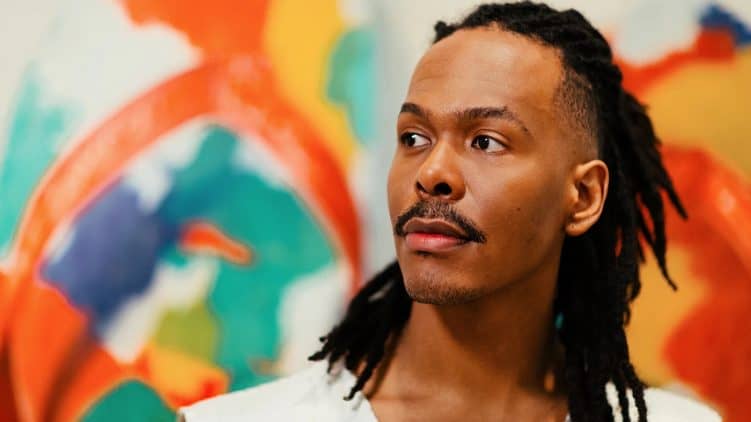 Jeangu Macrooy: A closer look at… Birth of a new age

When Eurovision 2020 was cancelled, Jeangu Macrooy had to write a new song for this year’s Song Contest. It’s called Birth of a new age. What is the song about? What kind of song is it? That’s what we’ll be looking into in this article.
Let’s start with two quotes:
‘Everything I write says something about where I am in life at that particular moment.’
And:
‘I think there are very few people who haven’t gone through some kind of change in 2020.’

Roar
Flashback to Januari 1st, 2020. Jeangu Macrooy posted an elated message to Instagram: May the twenties roar! ‘A bit overconfident in hindsight,’ he said at the end of that year in an interview with Kunststof, a Dutch radio programme.
Because shortly after, the pandemic hit and it permeated pretty much everything. ‘The twenty-twenties have indeed been roaring so far,’ Jeangu said, ‘but not in the way I expected, not in the way the world had hoped.’

Jeangu Macrooy sings Grow in the finale of the Eurovision Song Contest 2020. It will be one of the most personal entries – this much is clear already. But what is Grow  about? What exactly is the narrative of this glowingly intense song? Slide projector The song starts with reminiscing. In the clip Jeangu lies down on a rigid wooden … »

Okay, today
Just like all other returning participants, Jeangu had to write a new song for Eurovision 2021. ‘That was… something. Not a disaster per se,’ he says with a broad smile during the presentation of Birth of a new age, ‘but, let’s call it, a rather arduous journey.’

Several attempts were made, but it all came down to that one day when Jeangu and his producer/manager/songwriter Pieter Perquin headed to the recording studio. As soon as he entered the building he could feel it: ‘Okay, today is gonna be the day.’

Following the recording sessions there must have been an exciting presentation in front of the tv networks’ selection committee. We say ‘must have been’, because we weren’t there, but something like this must have occurred, with a very satisfactory outcome. Because Birth of a new age is a powerful song, best characterized by words such as resilience, genuineness and pride. During the first live performance, a radiating Jeangu, dressed in a stunning outfit, sang the message of courage to whomever wants or needs to hear it.

Smallest coin
The song Birth of a new age also introduces something new to the festival: it’s the very first time in the history of Eurovision that someone sings in Sranantongo. Jeangu Macrooy thereby adds a new language to the Eurovision melting pot.
Sranantongo (literally: ‘Surinamese tongue’) is a creole language that started out as a language in which slaveholders and enslaved people communicated. Over time it has been influenced by English as well as Dutch and it is now a common language in Surinam.
This is Eurovision’s first line in Sranantongo: Yu no man broko mi! Meaning: ‘You can’t break me!’ A sentence based on an old Surinamese saying: Mi na afu sensi, no wan man e broko mi – ‘I am a half-cent, no one can break me (for change).’ For a long time, the half-cent was the smallest-denomination coin, that, therefore, no one had change for. The choir behind Jeangu (which includes his twin brother Xillan) proudly ends the chorus and the entire song with the other half of the expression: Mi na afu sensi! ‘I’m a half-cent!’

Heritage
‘A good song requires a certain vulnerability,’ according to Jeangu. ‘When you’re honest and you open up, you have a better chance of reaching others.’

Birth of a new age is definitely authentic, and as such has a deep connection to Macrooy’s other songs. They’ve all been influenced by his Surinamese heritage; Jeangu lived in Surinam for the first twenty years of his life. This is where he went to school, started drawing, started making music. Take, for instance, the song Aisa, a prayer to Mother Aisa, goddess of the Earth. This is the song with which he opened every concert in his early years. Or his first success, Gold (see inset), with which he became a ‘Serious Talent’ on 3FM, one of the national radio stations.

Wealth
About the song Gold he explained: ‘When I came to the Netherlands when I was twenty, my biggest shock was the discovery of how they celebrated July 1st, Keti Koti, the commemoration of the date when slavery was abolished in Surinam. Some people didn’t even know the significance of that day. That is truly painful. Almost as if a part of history remains unacknowledged. It’s viewed as belonging to Surinamese or Antillean history, when in fact it’s just as much part of our Dutch identity. If we want to establish a society in which everyone is seen and heard, I think this deserves a far larger and more respectful celebration and remembrance. I wrote Gold in order to express that feeling, using gold as a metaphor for the wealth of a country that is, in part, based on profits made from colonies and through the exploitation of people. There is still a lot of ignorance, that makes it difficult to understand certain aspects, but I’m happy with the progress we’re making. Every year I see more diversity and more white people during Keti Koti, and that is a beautiful thing. The Netherlands just so happens to be a multicultural country and the connection to Surinam and the Antilles will always be there.’

BIRTH OF A NEW AGE

We are the fruit, adorning the legacy of every forgotten revolutionary.
Born in resilience, proud like a lion.
We are the birth of a new age.

Rhythm
Birth of a new age isn’t just about Surinam. The second key sentence, in addition to Yu no man broko mi, is Your rhythm is rebellion! The choir repeats this message several times in true gospel tradition, almost turning it into a mantra. In that mantra there is room for everyone. We are all told: your own rhythm is a turbo motor. You decide what that rhythm is, and the rowing will be a lot less exhausting. In other words: determine who you are, and the currents will no longer dictate where you go.

Personal for everyone
In a more specific sense, what ‘Your rhythm is your rebellion’ tells you is that it doesn’t matter which walls you’ve hit in 2020 – whether they consist of your own fears (Will I contract the corona virus? Will I lose my job? How do I deal with loneliness?), of society’s fears (Does my skin colour determine the way others see me? Is gender or sexuality something that makes others look away from me?) – they cannot break you. If you know who you are (if you’ve found your own rhythm of rebellion), you find yourself at the birth of a new era.

And that is how this song, as personal as it is for Jeangu, becomes personal for everyone else who is prepared to project it onto their own circumstances.

More about Netherlands More from 2020 (Cancelled)

Changes
Yes, the song refers to the manic year we’ve all had. Of course it was the year in which covid-19 took over our daily lives and lyrics such as This ain’t the end, it’s the birth of a new age may hint at whatever happens next. Eurovision has more entries this year in which corona makes an appearance: the Lithuanians refer to dancing alone in your own home and the Czech winks at all the extra pounds on our hips.

But 2020 was also the year of the Black Lives Matter protests and the year in which more and more  LGBTQIA+ characters appeared in films, series and books – things that Jeangu, as a queer person of colour, often addresses in his lyrics and interviews.

Growth
So, Birth of a new age can be viewed as a combination of all of the above. And where Grow, last year’s song for Eurovision, was the final summary of a depressing period, this song is the introductory summary of a message outward. Last year he sang: The more you learn, the more you grow, and now that growth helps him spread his arms to welcome a new era.

Better
Birth of a new age is also the title of the speech that Dr. Martin Luther King gave 65 years ago, right after the Montgomery Bus Boycott. (Quite coincidentally, this was in the exact same year that the Eurovision Song Contest was ‘born’.) One of the things Dr. King said in this address was: ‘ It is an exciting age, filled with hope. It is an age in which a new world order is being born. We stand today between two worlds—the dying old and the emerging new.’

We don’t know whether the song Birth of a New Age is an actual tribute to that speech, but what was true in King’s time holds true today. In which case the Dutch Eurovision song of 2021 and the sweet promise it contains just so happens to be a beautiful tiny echo of those grand words.

And that echo is: things can’t be the way they were… but they can be better.