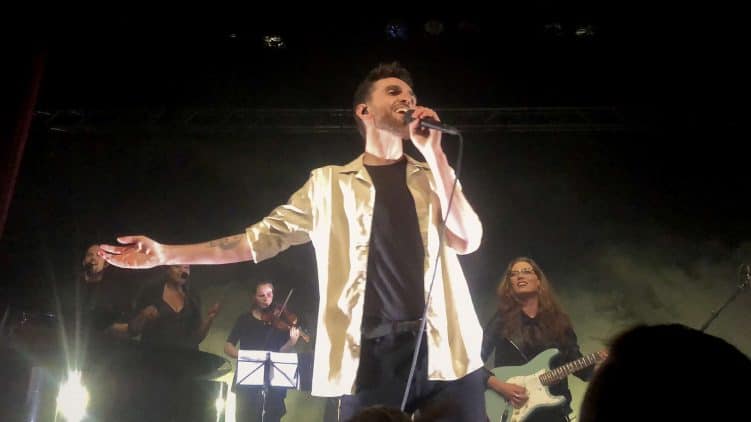 Duncan Laurence: how it all began Amsterdam, May 1, 2019, Het Zonnehuis

More about Netherlands More from 2019

This is how it all began. That’s what we’ll say. Later, looking back. On Wednesday night, May 1, 2019 in Het Zonnehuis in the North of Amsterdam. Where, for the first time in his life, Duncan Laurence gave a concert.

This is where it all began. Crossing the IJ on a ferry, into Tuindorp, walking through working-class housing, onto the Zonneplein, where you show your ticket and proceed into the theatre. Lights out. One single spotlight, a boy walking onto the stage, lit from behind. The cartilage in his ears is translucent. He seems almost transparent, barely real. Which also describes his way of singing: thin, yet sure, accurate. 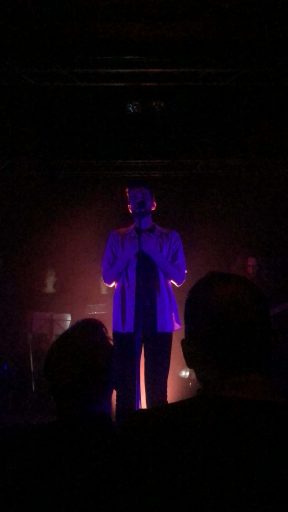 Part of it
Surrounding Duncan are a pianist, a drummer, a guitar player, three violinists, a cellist, two backing vocalists. Everyone on stage is smiling – almost constantly. The guitarist didn’t have a microphone but sang along to each song, word for word. As did the violinists. They didn’t have to, it was inaudible, but they just wanted to take part. To be a part of that very first hour.
And in that first hour, we learnt a lot about Duncan Laurence.

Debut
For instance: there will be a cracker of a first album coming out soon. For those who think everything Laurence does is similar to Arcade it will be a pleasant surprise. The third song of the night, Tomorrow, is funky and gospel-y, full of movement – the singer moves with the music, he leads it, stirs up the audience. The entire hour is filled with his own material, some of which has only been written two weeks before. It’s an hour full of convincing songs. Duncan Laurence is not a one hit wonder.

‘Phew!’
What we also discovered: everything is still real. When Duncan Laurence sings, his eyes are looking into the endless distance somewhere behind us. But when he speaks, he opens up and smiles a broad smile. ‘Phew,’ he suddenly says, after singing his second song. The relief of a musician who is still so pure: I’m here, we’re here. He tells us about his experience in the past few months. He compares it to standing in line for the Python [a well-known theme park rollercoaster], thinking that you’ve had the worst of it by enduring the excitement of queuing up and waiting. But once you get on board, you realise it will be much more exciting than you could have imagined! Can he handle it? He ponders this for a moment and says: ‘So far, I’m doing fine,’ to which he adds, after a short pause: ‘And that’s because of you. Because of all the incredibly positive reactions.’

Duncan Laurence will be singing Arcade for The Netherlands in the grand arena of Eurovision 2019. What was it again that the Dutch representative Waylon said last year? ‘Participating in the Song Contest is the musical version of participating in the Olympic Games.’ One could argue that Waylon’s years of experience counted as a proper training for the event. But Duncan, … »

Here & now
Another thing we learnt: Duncan Laurence’s music is able to provide comfort. Not everything in life always goes well, he says, and the best you can do is be here and stay here. ‘We are always at our best in the here and now,’ he concludes his introduction. A moment later everyone on stage sings – with or without a microphone – loudly: ‘We are still the greatest,’ with all the stage lights accentuating that final word each time. Where Arcade voices sadness in a thousand pieces, other songs give hope and want to mend: 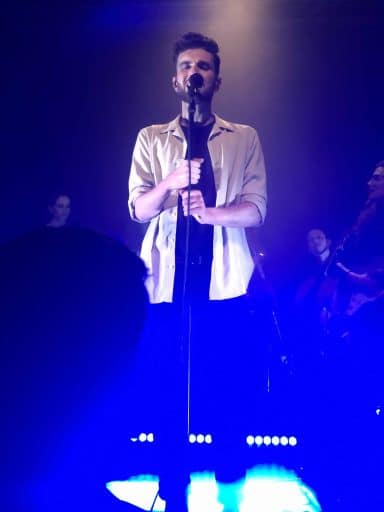 Future
Of all the feels that Duncan Laurence is able to share with the audience in this hour, there is one sensation that seems to make a lasting impression: that immense energy. And: the enthusiasm for the future. Those who were present on that Wednesday evening, May 1, 2019 in Het Zonnehuis in Amsterdam, will probably have paid little attention to the Eurovision bookmakers in the days after this concert. Because Duncan Laurence has already moved on. Of course, it will be an exciting competition. And of course, all of Eurovision-viewing Holland hopes that he will win. But we finally know now that none of that really matters. Whether he places first, third or tenth or even last in Tel Aviv, The Netherlands has gained a popular artist of international stature. This was his first concert. The audience was enchanted by the entirely natural musicality and originality. And everyone that was present will be able to say in later years:

This is how it all began. This was the starting point of Duncan Laurence’s international career.