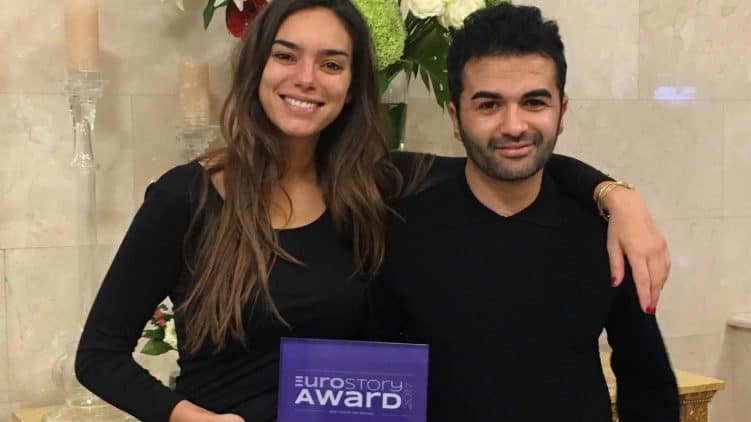 The winner of the Eurostory Award 2017 is the songwriter for Alma’s Requiem: Nazim Khaled, from France, for the line
‘Les siècles passent et disparaissent, ce que tu crois être la mort, c’est une saison et rien de plus – Centuries pass and disappear, what you believe to be death is a season and nothing more.’

What is this award?
To focus on the art of writing songlyrics, the founders of this site give out the Eurostory Award: an award for the best line of all the song lyrics from this year’s Eurovision-songs. It’s a prize that wants to point out the best metaphor, the strongest written line or the most poetic image.
Last year’s Eurostory Award was won by Jamala from Ukraine for her line: ‘You think you are gods, but everyone dies.’

Nazims reaction:
‘Thank you to the jury, I’m so honored to receive this award. I’m so glad that they understood it’s a line of hope. It wants to say: Death is just a season, and summer is coming. We have had such bad moments in Paris the last years, and although this was not the direct subject, it’s still a context: in these circumstances we need a message of hope.’

What is Eurostory?
Eurostory is a well-read online magazine from The Netherlands that combines literature & journalism with Eurovision. It features columns, articles, longreads and interviews.

Who was in the jury?
The winner was chosen by a jury of fifty professionals (published book writers, journalists, editors, songwriters, translators and ex-Eurovision participants) – as well as the readers of Eurostory.

Who finished second and third?
Finishing second was Norway’s line:
‘I’m coping with a map that is roadless.’
And third was the line from Italy’s song:
‘L’evoluzione inciampa, la scimmia nuda balla – Evolution trips, but the naked ape is dancing.’

Interview with our Eurostory Winner – surprise cameo by Amir! (VIDEO)