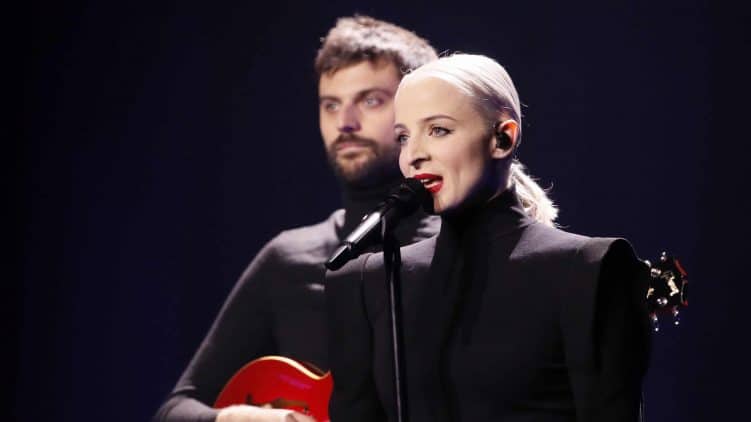 To highlight the art of writing songlyrics, www.eurostory.nl hands out the Eurostory Best Lyrics Award – an award for the best line of all the song lyrics from this year’s Eurovision-songs. This prize wants to point out the best metaphor, the strongest written line or the most poetic image.

All votes are counted and…
this year’s award is won by France: song writers Emilie Satt & Jean-Karl Lucas, also known as Madame Monsieur, for a line from their song Mercy: Je suis tous ces enfants que la mer a pris: je vivrai cent mille ans. (I am all those children who were taken by the sea: I’ll live a hundred thousand years.)

Who’s in the jury?
The winner was chosen by a professional jury of sixty published book writers, journalists, editors, songwriters, translators and ex-Eurovision participants from mostly The Netherlands and Belgium – as well as you, Eurostory readers, through our poll.

Who came second and third?
Second was Switzerland (Laurell Barker, Corinne Gfeller for the line: We’re the liars in the face of facts: different weapon but the same attack.)
Third place: Czech Republic (Mikolas Josef for the line: Honeybunny up-all-night, wannabe-couplegoals-queen: I know you ‘bop-whop-a-lu bop’ on his wood bamboo.)

Who are the previous winners?
Two years ago the award went to Jamala from Ukraine (who also won the 2016 Song Contest) for the line: You think you are gods, but everyone dies.
Last year France also won the award, specifically composer and lyricist Nazim Khaled for the beautifully meaningful sentence: Les siècles passent et disparaissent, ce que tu crois être la mort, c’est une saison et rien de plus – Centuries pass and disappear, what you believe to be death is a season and nothing more.

Later this week the award will be handed to the winners.