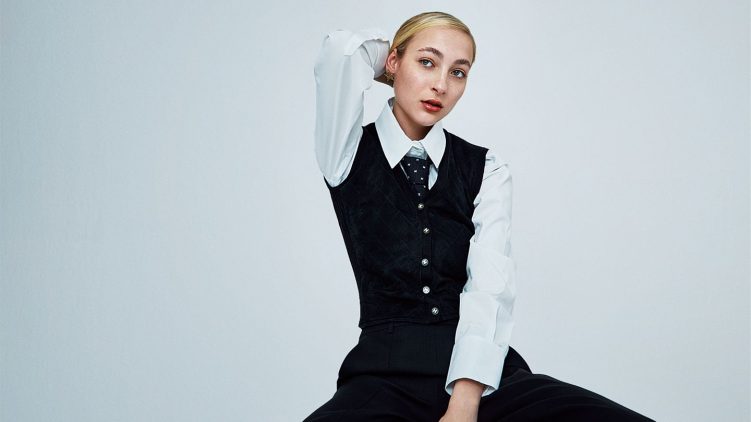 More about Netherlands More from 2022

‘I love myself a good sad song. And this is a good sad song.’ That is what last year’s Dutch Eurovision participant, Jeangu Macrooy, said about the song by this year’s participant, S10. Her song is called De Diepte – but what is it about? And just how good and sad is it?

Can’t see
De diepte starts out with
‘Do you know the feeling – your dream is never coming true
Do you feel afraid sometimes things will never change?’
The listener is addressed directly. S10 pulls us into the lyrics, emphasising her question by painting a picture in the following lines:
‘Because everyday it‘s raining
and i can‘t see where I‘m going’
Those lines make De Diepte‘s intro quite topical. These past years, and especially these past months, many of us may have felt unable to see a cheerful future for themselves.

A motorcycle
And yet, past the intro, the song seems to be about love instead – wounded love. Because what follows is this:
‘You and me together, right? –
It was supposed to be forever’
The clip accompanying De Diepte suggests the same. In it, we see S10 standing in front of an open garage with a motorcycle in it, which reminds her of a boy she was with (emphasis on was). The rest of the song shows flashbacks to a time when all was still well. Eventually we cut back to S10 standing in front of the open garage. Pondering what went wrong.

Deep
‘Out here in the deep I keep hearing your name’ – that’s the beautiful line at the heart of this song.
We usually associate the concept of ‘the deep’ with being ‘down’, with ‘rock bottom’, with sinking and slipping away.
Quite sad indeed.
But are we right?
In the remix of S10’s biggest hit to date, Adem je in, rapper Frenna says: ‘Diving into the deep is not something you do for just anyone’.
In fact, one could regard S10’s Eurovision song as the mirror version of Adem je in – a love song versus a ‘broken love’ song.
So maybe the mentioned ‘deep’ is not just ‘depression and despair’, but also the level of importance a relationship has had. At least it was deep.

S10 is S10
More about that in a bit, but first something about the music. De Diepte is a nice pop song, although it’s always dangerous to label S10 with a genre. She doesn’t call herself a rapper (‘I can’t even rap that well’), nor a singer (‘I always feel like people look down on you a bit if you call yourself that’). And: ‘I haven’t chosen a genre, and I don’t think I need to.’
So S10 is just S10 – but still, De Diepte has a balanced, traditional pop music buildup:
two verses,
two choruses,
bridge,
and a final chorus.

Hill
The arrangement makes us travel a hill, which is common for many hit songs:
the first steps are small and calm,
with (verse 1) just a guitar
and then (‘dadada…’) just a piano.
Then we go steeply uphill with beats, claps, and heavier guitars, with the choruses bringing us to the top,
after which we descend with
eventually just a piano
and the simple guitar we started with.
A few loose piano notes to conclude – and we’re back on the ground.

Dutch
It’s the first time since 2010 (Sieneke) that we’re sending a song in Dutch.
Will the language barrier prevent a good European reception for De Diepte?
Aside from whether or not that is a relevant question (during last year’s contest, non-English songs placed eighth on average in the final and English songs placed fifteenth), with S10’s chorus being so open, with the universally understood dada- and hoohoo-sounds, and its melodies so clear, it’s hard to imagine that foreign listeners won’t get what the song is about. In fact: they will appreciate its authenticity.

Enjoying to pieces
Immediately following the premiere of the song S10 said, overwhelmed by the emotions from finally being able to share it: ‘I’ve come from so far. I’m doing this for the S10 of the past and for all the people who have been in that place. Turns out it can get better.’
She’s referring to her past filled with psychoses and depressions, which she’s always been very open about in both her songs and interviews.
Meanwhile S10 is radiating. In this beautiful interview with Gijs Groenteman (in Dutch) from June 2021, S10 talks about her current state of mind: ‘People’s compliments get me through the day, but my biggest comfort is my warm house and a Red Bull when I wake up.’
And: ‘I’m enjoying myself to pieces. Merely doing the laundry makes me happy’.

Sad
Which brings us back to the question: how sad is De Diepte? In the aforementioned chat with Gijs Groenteman, S10 also said: ‘Life has no meaning. But it’s nice for it to not have meaning. Because then it’s not so bad when something falls through.’
That’s a very comforting thought. It means that there’s not as much as stake as we think there is. That it’s not required to be happy all the time. When you collect all these statements by S10, both from her ever-inspiring interviews as well as from her lyrics, it becomes clear that that’s the biggest message: ‘the deep’ isn’t always that bad of a place.
And thus our Eurovision song, which momentarily seemed to ‘just’ be about a relationship, once again opens up widely – and becomes more than just sad.

This showcase on festival Eurosonic Noorderslag (January ’22) clearly showed that S10 had started spending a lot more time on her preparation.

High
Lastly, a final statement by S10, from mid-2021: ‘I have become very storm resistant.’ Or, as she puts it in the chorus of rapper KA’s hit Schaduw: ‘formed by the shadow’.
So S10 will surely put on a storm resistant and intense performance in Turin, together with creative supervisor Wouter van Ransbeek, director Marnix Kaart and lighting designer Henk Jan van Beek – but we can also trust this: S10 will show Europe that she is someone who knows what the deep does to you, but also how you can show yourself the high.

The Netherlands is one of the founding members of the Eurovision Song Contest, and so was there for the very first contest in 1956. In fact, the first ever song performed at the contest came from the Netherlands. The Netherlands always participated with the exception of two occasions on the 4th May (National Remembrance Day) and two occasions when they had to stay home because of too low a result. The first years were very successful for the Netherlands, with wins in 1957 (Corry Brokken) and in 1959 (Teddy Scholten).
Everything about Netherlands

Jeangu Macrooy: A closer look at… Birth of a new age