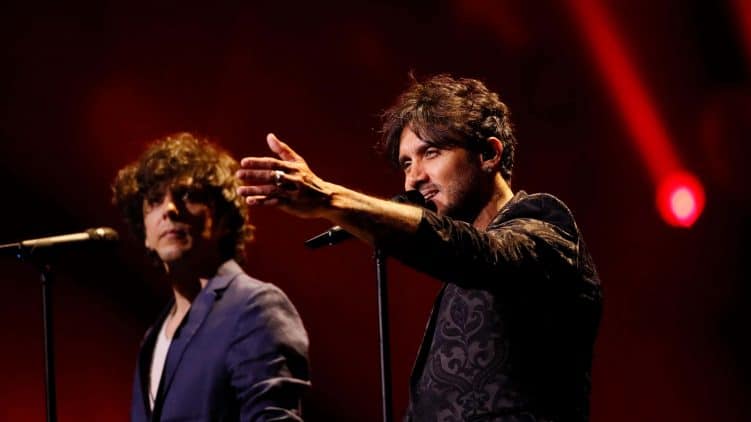 On May 22nd, 2017, thousands of teenage dreams were ripped apart when, after a concert of Ariana Grande in Manchester, an explosive went off. What should have been the evening of their life, ended for many of them in a nightmare. The name of the youngest victim was Saffie: a girl of eight years old who, a few days later, was buried in the pouring rain. In a reed coffin decorated with pink roses. In the background, Faith by Stevie Wonder was playing. The attack made a big impression on Italian singers Fabrizio Moro and Ermal Meta. Both singers stood on the eve of a new series of concerts and were swamped by messages from concerned fans. Is the concert still on? Will there be security? I’m too scared to go. Everyone seemed frightened – concerned – but Fabrizio and Ermal refused to accept that. ‘Suddenly we had a topic to write about.’

Bataclan
The writing sessions resulted in Non mi avete fatto niente (‘You have done nothing to me’), a song that promotes courage. A song with which the singers want to make clear that you don’t have to feel fear during concerts and events like the Eurovision Song Contest. The song that might have the most impressive lyrics of the year. In Caïro they don’t know what time it is now / The sun on the Ramblas is not the same today / In France there’s a concert, people having fun / Someone sings loudly, someone yells ‘to the death’.

Twin Towers
Not only the lyrics grab us by the throat. The videoclip accompanying the Italian entry is one to remember. In the clip of Non mi avete fatto niente images of war and terror pass by. A car catching fire, a father pointing out a Hebrew name to his son, military graves in Normandy, an image of the grounds where once the Twin Towers stood, and the text Pray for Paris – surrounded by chrysanthemums and withered roses. All this is alternated by images of children. Children with a silent gaze or a careful smile. ‘Please think of our youth’, is what Ermal and Fabrizio seem to say. Youth who will be raised with news bulletins and headlines they did not ask for. Yet the smile will win. Against all terror that impedes the journey / the world stands up again with a childrens’ smile / with the smile of a child.

Troubled childhood
Near the end of the song singer Ermal throws out a high note. From that moment on the images of violence are shown in rewind, what’s left for us to see are smiling children. But Non mi avete fatto niente is more than just a statement against fear and terror. ‘Every time we sing it together, we also think of the troubled childhood we – separately – went through,’ singer Fabrizio stated during the first press conference of the Italians. ‘Every time we sing You have done nothing to me, we really mean it. It is a feeling that has taken us hostage for so many times.’

Not English
Translating the song to English in order to explain their message better has always been a no go for the men. ‘When you translate it, you lose something,’ Ermal firmly claims. ‘We didn’t want to lose the text – the main spirit – of our song. That’s why we decided to show our lyrics in multiple languages on screen. To still make it understandable for everyone. To give people the right feeling, make them connect with it. That is very important. We don’t have a special choreography, no special dancers or musicians – we do it by ourselves. And that is enough for this song.’

Politiek statement?
Whether the song contains a political message? ‘We have never seen our song as a political statement,’ Ermal says. ‘Rather as a social statement. The song is about people, after all. And yes, it’s true. People practice politics. But in the end they are much more concerned with their own lives. With survival. We can say these types of things, looking each other in the eye. But there are plenty of people who don’t have this privilege. When we are talking about the lyrics, we’re mostly talking about hope. Hope that we need to convey to politicians, not the other way around. We have chosen them, we feed them, we carry them on our shoulders. But we don’t work for the politicians, they are working for us. At least, that’s what I think…’