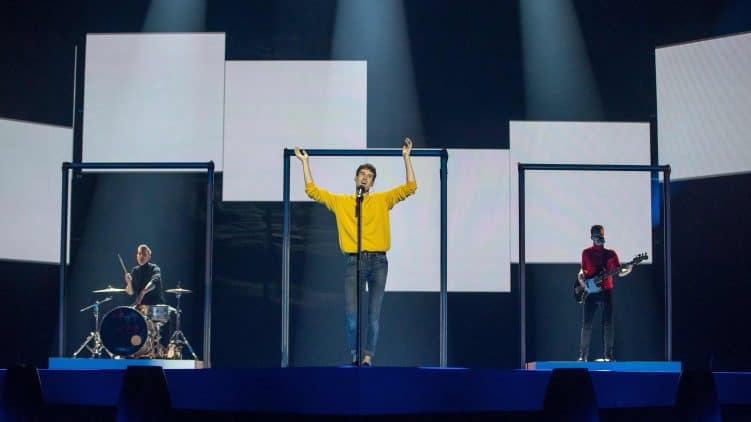 Lake Malawi: A universe of friends Interview with the band from Czech Republic

More about Czech Republic More from 2019

Their names are Albert Černý, Jeroným Šubrt and Antonín Hrabal, and together they are the Czech band Lake Malawi. With their song Friend of a friend they participate in the Eurovision Song Contest of 2019. A little while ago, we got to talk to them about lyrics and about reading – beware: an interview for book lovers!

The lyrics to your song Friend of a friend are nominated for our Best Lyrics Award. The jury said: ‘I think your text has something extra, there is a wink. How did you write the lyrics, where did it start?
Albert: You know, there is this first layer of the lyrics – the basic story is like a silly excuse. When your girlfriend or your boyfriend is jealous of some other person, you can always say: she or he is only a friend of a friend. So that’s the first layer. But then, in a deeper sense, I wanted to explore the idea of our friends who introduced us to different friends. But also friends from the past: they are a link in the chain. And if I hadn’t had them, I wouldn’t be where I am right now. Let me give you an example… If the drummer from my previous band hadn’t had a friend who played with Jeron, Jeron wouldn’t be my bass player now. In Lake Malawi. Do you know what I mean?

Like a universe of friends
Yes, the universe of friends! This neverending chain. And I like the thought that we are all connected. Not in a cliché way, but in a very normal, down to earth way. If it wasn’t for my friends, those of the past, or my current friends, I wouldn’t be where I am. They are pushing me forward in the direction my life is taking.

Onwards! Onwards! Every year the Eurovision Song Contest is professionalizing a bit more. And we try to give a little push as well, by  crowning the best lyrics – to the writers of which we hand (for the fourth year in a row) the Eurostory Best Lyrics Award. Last year’s winners were: 2018: France 2017: France 2016: Ukraine but that … »

Your lyrics tell things that they are not actually telling. There are things to be read between the lines. Is that something you pursued, or did it just happen?
Do you mean this hidden meaning? I’m just really pleased that people hear that. To me it’s always great when people find their own story behind a lyric. And if they do, it means in their eyes the lyrics are good.

What line of your song are you most content with? Sorry for the difficult question.
No, it’s actually a nice question, but no one has ever asked us this before. I think we could all say our own favorite line.

Yes, please!
Jeron: For me it’s ‘I don’t know if you understand’. Because that’s the entrance to all those hidden other meanings. Not only for the girlfriend, but also for the listeners.
Antonin: For me it’s the beginning. ‘There’s someone behind the walls making the same sound.’ It feels like, you know, you’re lying in a hotel, and there is someone behind the wall making noises. And you are telling your girlfriend: can you hear it? Things happen in room after room, and the things that happen are all the same. The people in those rooms are all the same. We are all the same.
Jeron: Yes. It’s very visual.
Albert: … [thinks really, really long]
Jeron: I think it’s hard for him, because he wrote all of the lyrics. It’s a whole story, how can you choose one line?
Albert: I quite like the ‘I don’t know if you understand’ part as well.

Musically the alliteration of ‘a friend of a friend’, all those f’s, work really well.
Albert: If you think so! You know, this song is fairly new for us. We’ve only done it a couple of times live. But we always enjoy it and I like the fact that you can dance to it to, because some of our earlier Lake Malawi-material is more alternative, and maybe slower. More mellow.

Will there be a girl voice as well, saying ‘I’m only a friend’?
Yes. We brought three backing vocals from Czech Republic. Unfortunately you won’t see them on stage. They’re gonna be behind the screen. It’s just us three on the stage, creating sort of a triangle. One guy in the middle, two guys on the side. That always looks good. And one of the vocalists is a girl. Some time ago she sent us her recorded version of the song and we really liked it, so that’s why she is here with us.

For the meaning of the song it might be better that we don’t see her.
Yes, ‘cause she’s gonna be behind the wall. For real. Last question. About books. Are you readers?
All three: yes.
Albert: I’m a massive reader.

Cool. Do you have any recommendations?
Albert: I’ve read some Elena Ferrante. Three parts of the series. I liked it a lot, my mother gave me these novels. I read a book by Sylwia Borowska, in Polish, it’s called Mój mąż Żyd, ‘My husband is Jewish’. I speak Polish as well, and it’s a book with eight stories from Polish women who married someone from Israel and moved there. Before flying to Tel Aviv for the shooting of the post card, I read this book to get an idea of what the culture is about. But And I also like Das Lola Prinzip by a guy called René Egli, which is more about philosophical stuff. But my favourite book in this genre is How to wish well, by Pierre Franckh.
Jeron: I’m not sure if I can choose one book. But if I have to choose an author, I would definitely choose Haruki Murakami. Every book by him is great.

Isn’t there one book that is extra special to you?
Jeron: Maybe Kafka on the shore. But I also like Never let me go by Kazuo Ishiguro. It was very dark, I cried at the end.
Antonin: I’m not sure if I can mention one favourite book, but I grew up on Jefferey, the detective story writer.