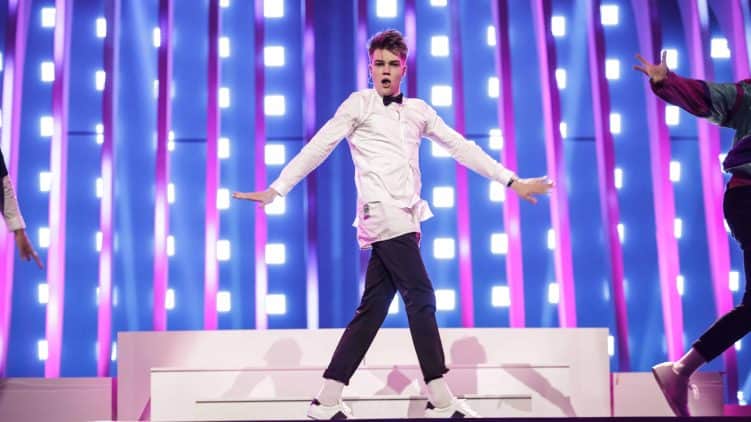 Can we talk about the lyrics of your song?
Cool, I like that. Let’s get to it!

Well, first question: what line do you like most?
I was in the studio recording this and the moment I did: ‘I know you bop-whop-a-lu-bop on his wood bamboo’ and the sound engineer I was recording it with was like: how the fuck did this come to your mind? And now this line is what people talk to me about the most, this is what gets stuck in their head.

Is that because of all those funky b’s?
Yes! This is how I often like to write stuff. I don’t really come up with words first. Apparently this is the Swedish way, Charlie Puth [famous songwriter, EV] also works like this. He just makes syllables and sounds that seem to work with the beat. And then you try to come up with words that sound similar. So when we created the music and came to this part I did something like: ‘Bab-badalabab, badaap bambam bada,’ and somehow I tried to find some lyrics that would go with this. This is really important: the vocals have to go with the beat. But I’m not a professional you know, I just write stuff how I feel it.

But of course you are a professional! The whole song is playful, there is metaphor after metaphor, and so on.
The thing is: I never think about writing lyrics this way. I’m never like: is this a metaphor, is this an oxymoron? That is the stuff I remember from school, but I don’t use it. Ever. I just start vibing. Usually it is a long process. Lie to me took me one year to write.

So what was the very first start of the song?
It was a cry-baby ballad song about a breakup. And the original meaning was: ‘if you don’t love me, at least lie to me that you do.’ So it was a very, very emotional ballad. And then, after three months or so, I thought: I don’t want to feel like this anymore. I want to move on. I took the track and I converted it into a dance track. And it seemed to work. Once I edited the kick pattern, the ‘boom tchk boom boom tchk’, it started to work. I remember the moment I sent this to my mixing engineer, it was October 8, 2016, about 5 o’ clock in the morning. And then I released it in 2017, November. So yes, it really took me one year to complete this process. There was a lot for me to learn, not only as a producer, but also as a song writer. Like: how to write songs simply, so that they hit the right spots. But still it should be a heartfelt thing that you’ve been through. It’s not always easy.

During your performance, would you say more of a musician, trying to focus on the singing and the rhythm, or are you also delivering the message?
I’m always delivering the message. That is the problem with me, because I always focus om the fans and the energy, and then sometimes I make some kind of small mistake… It’s much better now, but before I didn’t really pay attention to the rhythm, and to many technical things. I think the energy is still the main thing, but these other elements should also be kept in mind. I don’t tend to loose myself any longer.

By the way: are you a reader?
Right now I’m into The four agreements [A Practical Guide to Personal Freedom, by Don Miguel Ruiz] but it’s very difficult in this stage. I read a page and a half and I fall asleep. But yeah, I’m a reader.

Are there books that you can recommend?
I love Paulo Coelho, that’s one of my favorite authors. The alchemist, of course. And then Ernest Hemingway. One of my favorites though is The Aragon Saga, you know, I’m into this stuff, and I read Harry Potter so many times, you can’t even imagine. I also read a lot of biographies, for instance the ones about Miles Davis, Michael Jackson, Keith Richards’ autobiography… That last one was amazing.

And was there a book in your childhood that you still remember?
I’m not a Disney person. I like the traditional storytelling more. I would say a lot of the Czech traditional fairytales, and of course Medvídek Pú, the story with the bear and the donkey. You know, Winnie the Pooh!

Back to the song: how difficult is it?
It’s a super difficult song. I was teaching the backing vocalists how to do the track, and believe me, those are long sessions. Even for professionals, when it comes to phrasing and the rhythm of the song, the groove of the song, all the rap parts… Sometimes they double me, like in: ‘when the beat dropped she dropped, dropped it like it’s hot’… There are so many tiny things that you have to get right, because if you don’t get them right, it doesn’t feel like the real thing anymore.

Is this why there are not that many cover versions of your song?
Yeah! I haven’t seen many, maybe because not a lot of people can pull this off.

I love that you use the word ‘couplegoals queen’, I’m sure this has never been used in a Eurovision song before.
Ahh yeahhhhh! I’m sorry to one of my ex-girlfriends for this, but yeah, after we broke up there were a lot of couplegoals hashtags that she used with her new boyfriend, and I was like: oh my god, this is really embarrassing. So ‘couplegoals queen’ has a secret meaning haha… Okay, now it’s not so secret anymore. But well, nobody will ever know which ex-girlfriend of mine it was.

You’ve got that many?
Yeah, there are actually a lot haha.

Lake Malawi: A universe of friends