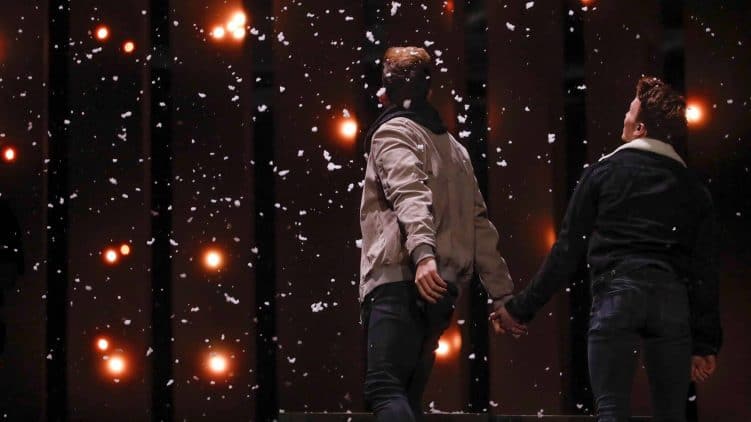 Ireland: A Tale of Two Boys

Two boys are leaving the pub. It’s cold outside, so one of them waits in the door opening to put on his scarf. They walk. It had been raining until a few minutes ago, the streets are glistening in the light of the lanterns, pubs and shop windows. It’s quite busy outside, people are talking, glass in hand, someone takes his bicycle, someone else pulls up his hood.

The boys talk to each other, they’re laughing. The boy with the scarf stares a little timidly down at the ground beneath his feet, but he can’t stop smiling. The other one is a bit more daring, looks at him every now and then and keeps the conversation going.

And then, suddenly, their dance begins. Just like that, in the middle of the street, time shifts and an entirely new reality opens up. They turn around one another; the street has become their stage. Four girls behind them move aside, but they don’t give them any curious looks, they don’t say anything. The boys keep dancing, turning away from each other and towards one another again. The quiet boy keeps his hands in his pockets, the others lets them sway beside his body. It’s the echo of something that was sung only a short moment before, the opening lines…

On screen time shifts back to resume its regular form. It’s begun to drizzle again, or perhaps it’s a snow flurry? Some passers-by have opened up their umbrellas. The boys continue walking as if nothing happened. The talkative boy nudges the quiet one teasingly in the shoulder. Leisurely he lets himself be brought out of balance, and veers a little to the right.

They stop by the wall of some building. One in front of the other. The tension suddenly glows. Wisps of breath touch each other. They laugh, they look one another in the eye.

Once more, time shifts. The dance resumes: they touch each other, they move away from each other and they return to one another. Now they take each other’s hand and they start running. Running, running and dancing. With each other. With the evening. With time.

No more inhibitions. Their last journey begins. Hand in hand, at first, but after only a few seconds they let go. A bridge appears somewhere in the distance. The music fades, the image darkens as soon as they begin to cross.

The hands of every clock in sight speed up. The boys walk across the water as time washes away beneath their feet. Everything that’s left unspoken: the time of being in love, the doubts that start to cause hairline fractures, the silent accusations, the even more silent suspicions, the confused realization that you thought this was all for real, real, real.

How could true love look me in the eye
and lie, lie
I thought we’d be together ’til we die

Once they near the end of the bridge, something very special happens: we suddenly see them again. The water turns into a sea of people. The city is an auditorium in Lisbon. The two boys are the same as before: the silent one with his hands in his pockets, the talkative one who can’t keep his eyes off the boy next to him.

And they dance. For us. Against time.

This article was translated by Sandra Hessels.

Waylon and his proud country