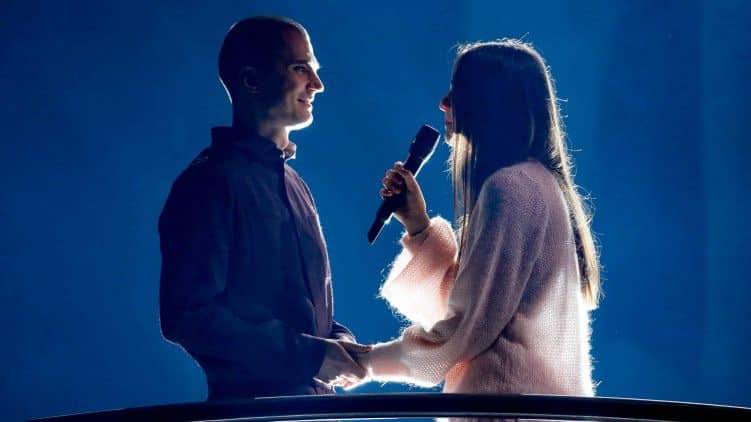 Initially singer Ieva didn’t want to participate at all, but when she heard When we’re old for the first time, she was sold. She immediately thought of Valdas Adamkus, the man who had been president of Lithuania for about ten years. She thought of how Adamkus once was present at one of her concerts, together with his wife. Of how he and his wife sat on the first row. And how they grabbed each other’s wrinkled hands as the song progressed.

Not only did Ieva think of former president Adamkus while listening to When we’re old. Maybe much more intense was the thought of her husband Marius Kiltinavičius, with whom she wants to start a vegetarian restaurant. At least, when they both will be a bit older. And will have two kids, and a frisky dog. No matter what comes our way / I feel like you’re here to stay. And that may also immediately be the reason why I am dedicating this text to Ieva. She’s a bit like the Maaike Ouboter of the Baltic states: pure, sincere, someone who articulates her feelings without too much finery. Ouboter, who once sang the following words on the melody of One day (Asaf Avidan): But when we are old and not much wiser / We will remember instead of the stories / Now only just the pain. Lyrics that zoom in impermanence, the dark side of approaching old age.

Alright, back to Ieva. During the various press conferences she stated multiple times that she is very nervous. Not so much for the performance itself, but actually for everything that’s happening around her. ‘When I am nervous, I start laughing and making weird noises. In real life I am actually very shy.’ Every word of that seems true. Ieva giggles a bit, wobbles back and forth, sometimes scratches her left leg, and then she lets her hand rest right underneath her knee. When she gets complimented on the sweetness of her voice, she immediately thanks her father and mother. ‘They did that.’ Again followed by that disarming smile.

Everything Ieva says, everything Ieva does: you believe it right away. Especially the last fifteen seconds of the song. This is where – right before the end – she sings two phrases in Lithuanian. About how she actually immediately knew that it was alright. It is striking, by the way, that she sings those two phrases in her own language and the rest in English. ‘Because it is a special year for Lithuania’, Ieva stated during one of the many press moments. After all, 2018 is the year in which the Lithuanians celebrate the centenary of their republic. On February 16th, to be exact.

Moreover, a whiff of chauvinism was also visible during the national final. There, after winning, Ieva put the Lithuanian coat of arms around there shoulders. A red shield with a silver knight on it, drawn sword and all. A flag that used to be carried by monarchs, but was declared a national symbol in 2004. What is it Ieva wants her whisper-soft tune to do? ‘To tell a message. A message that you normally only see in films like The notebook and A walk to remember.’