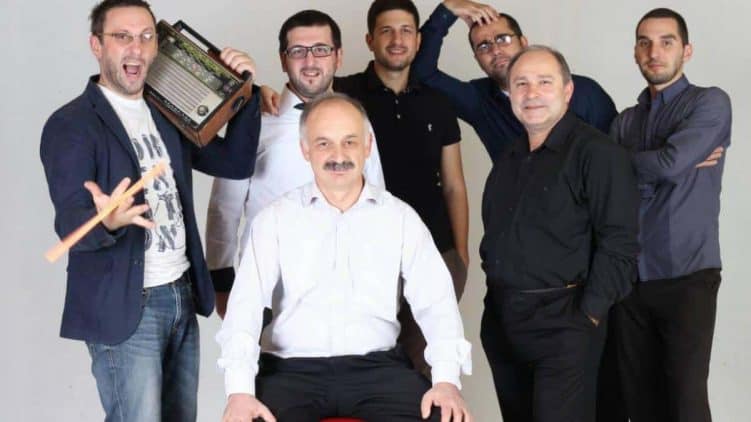 More about Georgia More from 2018

Something happened during Eurovision last year. Amidst all the fireworks, light shows, dancers and apotheoses, a little song from Portugal won. It gave us a message: bring back music. Georgia took that advice, and sent ethno-jazz formation Iriao with a plain task: go to Lisbon, and bring music.

Salvador Sobral at the Eurovision Song Contest 2017, after his victory with Amar Pelos Dois.

Salvador’s call
A year has passed since Salvador Sobral. A year since his Amar pelos dois, and since his victory speech: ‘We live in a world of disposable music. Fast food music without any content, and I think this could be a victory for music that means something. With people that make music that actually means something. Music is not fireworks. Music is feeling. So let’s try to change this and bring music back.’

What is Eurovision’s answer to that call? To be able to answer that question completely, we have to wait until after the contest. But a small part of that answer lies in a song you can hear tomorrow night, a song that hopefully will make it through semi-final two: For you by the Georgian formation Iriao.

Cultural Heritage
The English title is only a remainder of the time Iriao still considered a mix of English and Georgian lyrics. Eventually they chose their own language all the way – perhaps inspired by Salvador? So Georgian is the only language you will hear during their performance. In their own country, Iriao is already well-known for their unique cross-over combination of jazz and traditional Georgian music. Their harmonious singing contains elements of Georgian Polyphony, a singing style comprised of three and more voices. Coming from the traditional folk singing of the countryside, Georgian Polyphony has been named by UNESCO as an Intangible Cultural Heritage of Humanity.

To share yourself
So what is it they sing about? The song represents their musical mission: bringing tradition and new music together. Folk and religion blend very well in Georgia, so the lyrics of For you contain many religious elements. In the first sentence of the song Iriao calls for the day to be longer and the snow to melt. They ask the sun: ‘Shine for us, not for me/ Make the heart happy with the happiness of others.’ The entire song emphasizes the importance of sharing, that’s what For you is all about. ‘What is your heart worth if you don’t break it into nine pieces to share with others / the wind will take the rest / you only possess what you share.’

This illustrates how experimental Iriao can be! In January they performanced their adaptation of a song by the famous Georgian composer Gia Kancheli. It was the soundtrack of the Georgian movie Kine-dze-dze.

Radio play
Iriao searches. Metaphorical: they want to find out who they are, they examine musical styles, combine and create new sounds. Sometimes that makes for a really experimental outcome. Then the music almost becomes a radio play, and the search becomes literal: their voices find each other, walk hand in hand for some time, then part again. Together they paint a landscape of voices. ‘That is really important,’ George Abashidze, one of the singers, says: ‘To know each other. To feel what the other one is doing, what he wants, what he needs.’

Many of the Eurovision-artists this year covered Amar Pelos Dois. Iriao is no exception. They transformed the song into something much closer to their style of music. This week they also performed the song live in Eurovision Village at the Praça do Comércio, in the center of Lisbon.

A three minute box
It’s tough, standing on that enormous Eurovision stage, having just three minutes. Three minutes to pull the audience close to you, have them sitting around you, listening to the sounds, the voices telling stories, looking up to the sky, dreaming of old monasteries in the Georgian mountains. But that’s probably not what will happen tomorrow night, and Iriao knows that all to well. That’s why they bring For you in a way that’s easy to listen to, a box that can be opened in three minutes. This form does not fit them as well as their usual form, and the very perceptive audience will see that. A little uneasy they will enter the stage, wishing the podium to shrink and the time to elongate.

Celebrate music!
A year after Salvador Sobral Georgia chose for music right from the heart of their country. Iriao stayed true to themselves even in languages, choosing for a language in which Georgians are used to sing. Iriao celebrates music and that’s what you feel as a spectator. During the national Junior Eurovision, five finalists sang For you. The grown-ups formed the background singers, the children who were right there in the spotlight stole the show. Look: this is how true music is made! In this respect Iriao might be the most literal answer to Salvador Sobrals call to bring back the music. That’s why Georgia is our love for semi-final 2 of the Eurovision Song Contest 2018.