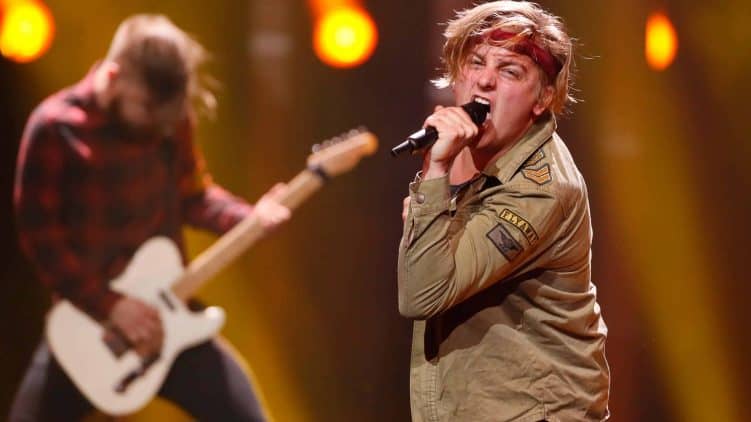 Singer Örs from Hungary embodied his late father and tried to reproduce his father’s last thoughts. The thoughts of a father whose son is standing at the end of his deathbed. The result is Viszlát nyár, which translates as ‘Goodbye summer’. Progressive Hungarian metal in which the summer is a symbol for life: the life that someone had to say goodbye to. ‘You need to talk about topics like this,’ singer Örs stated during the first Hungarian press conference. ‘Because if you talk about it, you will live your life in a better way. Happier. In Europe there seems to be a sort of taboo on death.’

The single cover of the Hungarian entry is supposed to help break that taboo. The cover is mainly black, with a coffin in the middle. On the coffin a turbulent ocean is drawn, above it we see a sky full of crows. In between the big black birds the sun is displayed, on it the initials of the band: AWS. What do these initials exactly stand for? The band rather keeps this a secret. Every day they answer this question in a different way. One day the press hears that AWS stands for Aron Went Shopping (referring to one of the band members), the next day it means Anti White Sheeps. And for the creative ones: We All Shower also came by. Linguistic chameleons from Hungary.

So writing about the death of his father has helped Örs. A singer who is surrounded by a team of close friends: the other members of AWS. Although the Hungarian entry touches on a sensitive subject, the men of AWS have nothing but fun in Lisbon. With each other, with the audience, with the press. The Hungarians genuinely enjoy every moment. ‘You must do the metal face when you make a selfie,’ they laughingly shout when a photo needs to be taken. The men also talk extensively about the friendships they have made with the other delegations. ‘With the Romanians, but also with the Backstreet boy from Austria.’ Every answer is accompanied by a hint of humour and a pinch of salt. Additionally, the men show themselves to be supporters of the anti-celebrity culture. ‘We don’t have nice cars or pretty clothes. We’re ordinary guys from Budapest. We drink a lot more orange juice than the average celebrity.’

‘Let’s throw our cards on the table / My ship has sailed out / And will leave you’ – these are the first three lines of Viszlát nyár. Lyrics that run a sharp contrast to the laid back appearance of the men. They’re wearing Adidas and dark jeans. They talk lovingly about Iron Maiden, Korn and, of course, Lordi. This is not completely inconceivable when you consider that the guys have been together since their teenage years. ‘We’re like a family. We always have problems, fight like cats and dogs, but in the end we love each other.’ And: ‘If we’re not on stage, you’ll find us in the gym.’ For the men of AWS the three Eurovision minutes will probably be unconditional, a crowning to a longstanding friendship. And death? That has brought them together even more.