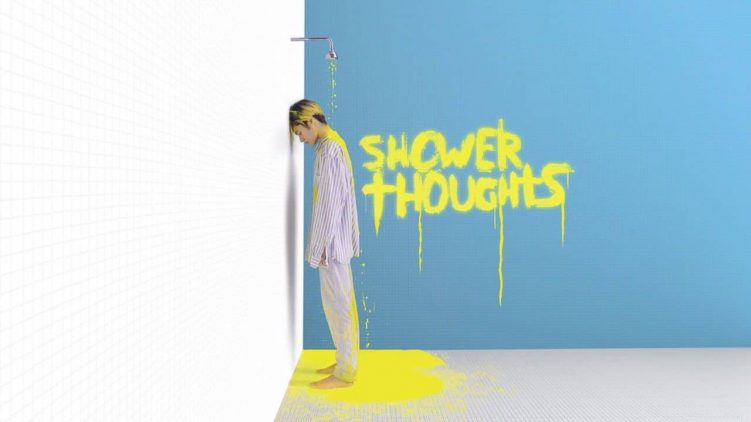 Kristian Kostov: Shower Thoughts The most beautiful lines of his 2018 EP

We’ve come to know Kristian Kostov from a groundbreaking runner-up position for Bulgaria in the 2017 Song Contest. The singer, who was seventeen at the time, performed his Beautiful Mess in an astonishingly convincing and surprisingly professional way.

He was given an EBBA Award, handed out to young artists who are ‘border breakers’: those who have attracted attention outside of their own country. Kostov also released two new songs: The one (I need you), an upbeat song written by Kristian’s brother, Daniel, and Daniels girlfriend, Maria Erke, and Burning bridges, which was composed by JOWST, the Song Contest participant for Norway, who met Kostov during the festival. (Eurostory interviewed JOWST about this, you can read the article here.)

In the Summer of 2018 Kristian Kostov’s first real EP was released: Shower Thoughts. It contains four songs that he co-wrote, all of which show one thing – in their production, arrangements, composition and story lines: personality.

In the first single, Get it, Kostov sings about feeling like an outsider. The refrain contains a wonderful turn of phrase for this, where he describes it as being a ‘chronic out-of-stater’. The music uses many small, yet perfectly timed sound effects to underline this. The production is well-done: Kostov sounds as though he is standing in an huge, resonating room, feeling a little bit lost.

At the beginning of the song, the main character isn’t in top shape. ‘I’m wasted but I’m fine’. His friends are ‘friends I don’t make’ and people around him believe that he spends his days ‘in a way they call unfair’.

The chorus that follows is beautifully ambiguous. At first you think he’s begging for you to ‘Get it, get it, get it,’ in the sense of understanding. But then there appears to be more to that line: ‘Get it – right or wrong’, with which he is most likely encouraging himself to do things right – or not.

The strongest part of the song might just be the way in which the second verse starts exactly as the first, only to be interrupted after two lines by an unexpected bridge. This really fits with the statement Kostov is making at this point. The two lines that have just been sung are: ‘I tried to be like them, to smile like I don’t care’, and then Kostov interrupts himself almost immediately with: ‘But what if I do?’ Followed by a rap/sung section full of lengthy sentences defending the outsider status: I know I’ve made a thousand mistakes, but if I need to, I’ll make a million more!

This is a nice musical translation of something he’s spoken about in a very personal video, with regard to the nasty comments he’s been dealing with since 2014, when he came second in The Voice Kids Russia, as part of Eurovision winner Dima Bilan’s team. In this same video, he explains how awful it felt to have to react immediately after reaching the second-to-top spot at Eurovision. And about his impulsiveness, about the arguments he’s had, about people who say that he is attracted to boys, about his acne, about the small gap between his teeth, about the things he forgets: Get it, get it, get it – right or wrong.

In Shower Thoughts the first person narrator is taking a shower and is making romantic plans. He doesn’t mind if they turn into something more erotic: ‘Got your head spinning, our bodies singing’.
It’s fun, the staccato way in which these plans pop up in Kostov’s head while he is in the shower in the second verse. You can practically see them emerge between the water droplets.
‘Meet.
Eat.
Movie.
At three.
Netflix ’till six.
And it’s time to kiss.
Enough.
Get rough.
Make love.
Hold tight.
We fly.’
Followed by the last sentence that is a summary, conclusion and wishful thinking all at once: ‘Ain’t no ordinary night.’

Lullaby, the third song on Kostov’s EP is a mysterious fairytale. With an enchanting melody (that really doesn’t differ much from verse to chorus, making it one long tale that the singer is practically breathing into our ears) Kostov tells the story of a boy, born approximately twenty years ago, whose mother used to sing a lullaby to him: ‘Close your eyes and count to three. Hear me breathing breathlessly. Close your eyes and count to three. I want to see you next to me.’

These are wonderful and exciting sentences. The word ‘breathlessly’ can mean one of two things, and ‘out of breath’ may seem to fit. But further along it becomes clear that she most likely means ‘without breathing’.

The rest of the song keeps up this mysterious story. Once upon a time there was a newborn baby boy. His name was strong, smart, courageous and young. He was born in a small village in the woods and wore a yellow hoody. His mother taught him how to fly, but whenever he feared the monsters, she would sing to him.

In the second part of the song we look twenty years into the future. The boy grew up and is now fighting for a better world. And then, suddenly, there is this ominous line: ‘Every story has an end.’ Yikes. What happened?

The following line reads: ‘Momma left to no-man’s land’, which can only mean one thing: she has died. ‘Time stopped, his armor fell’… Yes, that’s what it would feel like. Time grinds to a halt and a boy feels completely left out in the cold, when his mother dies. The protection has gone. What else is there to do?

Breathlessly. Kristian Kostov’s Lullaby is not a fairytale after all. It is a small, sad story – inspired by the death of his grandmother – about a boy who loses his mother at a far too young age, and at her deathbed the only thing he can do is singing back to her the lullaby she used to comfort him with. I want to see you next to me. With those final words, Lullaby becomes a magic spell that has stopped working.

‘Your life is black and white. I’m not that colorblind.’

The final – and perhaps also the strongest – song is Rift. One of the first comments underneath the song on the internet was: ‘Listening to this feels like keeping a hand on Kristian’s open heart.’ That is wonderfully expressed, and rightfully so, because Rift is the emotional farewell to a relationship.

The first line tells us about how intense this relationship was: ‘You were me, I was you.’ But it doesn’t take long for the conclusion: ‘You’re lost inside of me. And now I set you free.’

Where did it all go wrong? The second verse shines a light on that. The girl he’s singing about is ‘sixteen forever’. And then he adds: ‘Your life is black and white. I’m not that colorblind.’

The chorus has Kostov singing with all of his vocal power and a bleeding voice. The lyrics to this short refrain are different each time:
After the first verse, it’s: ‘You’re broken apart. And you’ve played your part.’
After the second: ‘Enough is enough. You left me in half.’
After the third: ‘My life is your gift. You know, this is…’
And then the song ends in one horrifying word, the music having fallen completely silent. All we hear is Kostov’s voice saying:
‘… rift.’

All songs were written by the same team: Kristian & Daniel Kostov, Maria Erke and Sasha Xuman, a Russian singer/songwriter and composer/lyricist who has his own label. This is also the label that released this EP: Xuman Records. In addition to these songs, which are a major step foreward for Kostov, there is also beautiful visual material available – do have a look at the video in which Kristian is taking a shower of yellow paint. We will have to wait and see if he is in for worldwide stardom along the likes of Shawn Mendes or Troye Sivan, but with Shower Thoughts the Kostov brothers have proven that they have what it takes.

This piece was translated by Sandra C. Hessels.