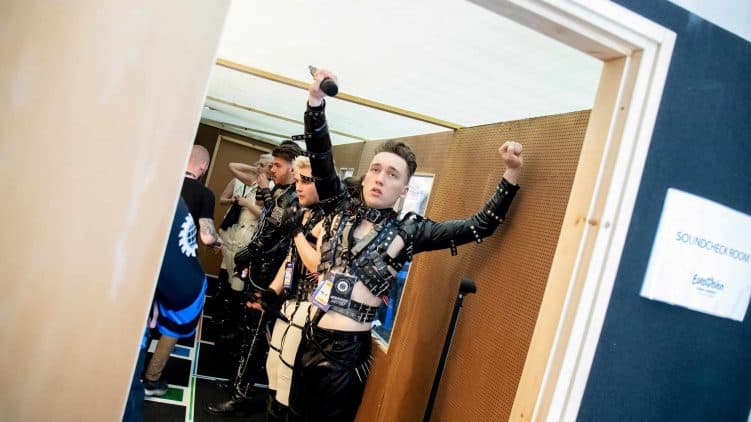 Iceland: what Hatari has to say about Gaza Our love for the first semi-final

More about Iceland More from 2019

The Eurovision entry for Iceland paints a dystopia: a horrific, fictional society. A society full of dismal elements that can best be described by using a word such as ‘sinister’. The lyrics for Hatrið mun sigra (‘Hatred shall prevail’) reads as the musical reincarnation of the science fiction novel Brave new world (published in 1932). And yet… the guys from Hatari haven’t just travelled to Israel in order to give the world a glimpse into their crystal ball. No, Iceland also has the intention of holding up a mirror.

And… there’s the word settlement. A subtle taunt towards the colonists that live in Israeli-occupied territory. Shortly after, the topic again turns in a more political direction, when one of the journalists asks: ‘Not too far away from us, hatred has won. So, now that you’re here… does your message contribute anything to stopping this hate?’ The hostess interrupts. ‘Just before you answer. We are here especially for the publicity of the Eurovision. And it can’t be held responsible for the safety of the citizens and other people. We are here to play music, to bring music and to have a very good time.’ Singer Klemens: ‘Well, we would like to answer the question…’ What follows is a measured reply in which Team Iceland broadens the scope of their message to include far more than Gaza, and then proceedsto accentuate Gaza again, specifically. The guys indicate that they will play by Eurovision rules, but that they will also use agenda setting in order to stir up a critical discussion about the context within which the Contest is being held.

The press conference ends rather messily. Afterwards, key members of Hatari – Klemens and Matthías – talk to various members of the (Eurovision) press. In front of cameras from fansite Wiwibloggs an interesting dialogue unfolds. The city of Hebron is mentioned: a city that is located on the West Bank and is largely controlled by the Palestinian Authority. A city divided into two sectors: H1, the Palestinian sector (80% of the city), and H2, the Israeli sector. Hebron, a city that made the news several times in the nineties. In 1994, when 800 praying Palestinians were shot at during Ramadan – of whom 29 were killed – and again in 1997, when a major step was taken in the Oslo peace process (signing of the Hebron Protocol).

Klemens Hannigan (participant for Iceland): ‘Arriving here has definitely changed our perspective. We went to Hebron, a Palestinian city. There, we had a Palestinian guide taking us around the H2-area. In the middle of the old town, there were three Israeli settlements and a military base. We passed streets known as “ghost streets” – the entire place was sort of a ghost town. All Palestinian businesses are closed now. The segregation is obvious; Palestinians are not even allowed to enter these streets.’

Matthías Haraldsson (participant for Iceland): ‘The occupation has many faces. The ugliest one is definitely the one you already mentioned, in the south, in Gaza. But it’s also very visible on the West Bank and in other places in this country. The political reality is really conflicting and absurd. And the Apartheid is so clear…’

Klemens: ‘We still believe that we can strike up this critical conversation or raise more awareness for the situation here. With our message, our power to set the agenda. And hopefully we will get through to the world by means of the Song Contest.’

William Lee Adams (fansite Wiwibloggs): ‘Indeed. And you also keep the world entertained – in an entirely different way. With your music, with your personality and your trips to the beach. WE SAW YOU IN LEATHER, ON THE BEACH. Please tell me, what was that like?’

There is so much to write about the Icelandic entry for this year. For instance, the Hatari-guys pointed to Naomi Klein, Noam Chomsky, Adam Curtis (Joy Division), Bob Fischer, Peaches, Rebecca Solnit, Die Antwoord and Theresa May as their political sources of inspiration. The song also includes the sound of an automatic weapon. Instead of reloading the gun, the band switches to singer Matthías who ‘grunts’ his way into the next verse.

In Iceland the song is a mega hit, especially among children. The Internet is full of videos that show school children singing along, heart and soul to lyrics such as Hatred shall prevail / luck will end / because everything is an illusion / a treacherous daydream. Enjoy (or be shocked by) this, this, this and this clip. But do remember that they’re singing about a dystopia.

Or, as Felix Bergsson, the leader of the delegation, so aptly described it: ‘It was very interesting to see the reactions when Hatrið mun sigra was released in Iceland. People were in shock. […] More interesting still was seeing how the top of the opinion slowly transformed as people began to realise the actual message of the song. […] Children love the song. They now mutter that hatred will prevail. But that’s only… if we stop taking care of each other.’

Running for your life – to join Eurovision