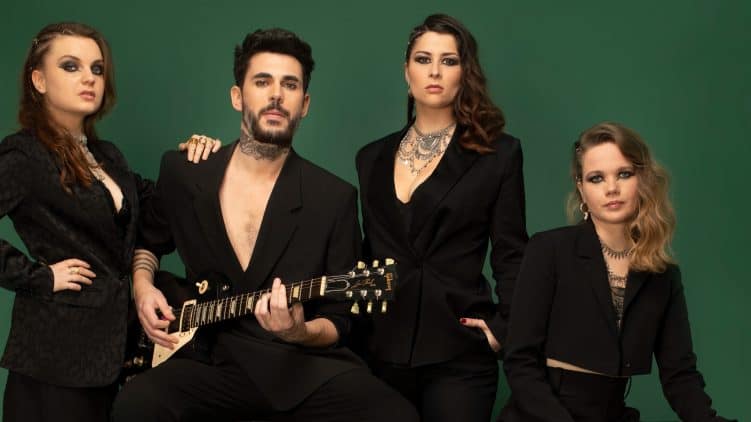 France: Dancing with the devil, so what?

More about France More from 2022

“I’m dancing with the devil – so what?” That’s the line from Fulenn, France’s entry for the Eurovision Song Contest 2022, that unleashes the beat and the wild dancing. Alan – the boy – and Ahez – the three girls – sing it in Breton. Who are they and what is their song about?

Unbelievable…
Alvan is actually called Alexis Morvan (29). He reduced his name to just the first and last syllables. Last year he met the three friends Marine, Sterenn, and another Sterenn (24, 25, and 26) who are called Ahez because – actually, let’s save that for when we discuss Fulenn‘s lyrics.
In any case: Alvan & Ahez has only just assembled, they got along well, decided to work together, Alexis had a melody lying around, Marine wrote lyrics to go with it, they sent it to the French broadcaster and their first-ever performance happened in the national final. When they paint this picture during the winners’ press conference, Alexis shakes his head and whispers: ‘Unbelievable…’

Never before
Alexis’ favourite song ever? He doesn’t need much time to think: Sweet child of mine by Guns N’ Roses. Coming up with this track as his favourite gives away Alexis’ love for rock, but he’d rather call himself an electro-rock-world artist. Fulenn, too, is a dance song, but mixed with classic Breton singing, or, as he puts it: ‘Music that has never been made before.’

Ahez
Marine, Sterenn and Sterenn met during college. A few years ago they decided to create a traditional Breton singing group and named themselves Ahez, which (here’s the explanation, pay attention)
comes from the city of Carhaix, where they went to college,
and the Breton name for that city is Ker Ahez,
which translates to City of Ahez,
with Ahez being a goddess/witch from Breton mythology.

Inspiration
This brings us to the pool of inspiration from which Marine dug up the inspiration for the lyrics of the Eurovision song. Also in that pool is her favourite movie, Les sorcières d’Akkelare (2021), about six girls who are accused of witchcraft. All of these interests, loves, and cultural backgrounds culminated into Fulenn‘s story.

Fulenn
‘Tan de’i!’ Alexis yells in the first bars of the song: ‘Let’s get started!’.
Then, the storytelling starts:
‘In dark woods the night appears.’
and:
‘Against the light of a torch, a female shadow whirls.’
What follows is the story of a girl who dances through the night like a flame and who mocks the wild animals. The word ‘fulenn’ means both ‘young girl’ as well as ‘spark’.
Marine explains: ‘It’s about the emancipation of women. About a girl that dances at a fire and doesn’t care about the world.’
In the song, Alexis calls out: ‘She dances with the devil – so what?’ and Ahez responds, three voices strong: ‘I’m dancing with the devil – so what?’.
The song ends with Alexis summarizing the story in one single sentence: ‘In the middle of a clearing in the woods, the spark dances – fearless.’

More about France More from 1996

Breton
Just once before did the language of Fulenn, Breton, make it to Eurovision. In 1996 Dan Ar Braz sang the song Diwanit bugale (‘So that the children may grow’).
Although Alexis does not speak Breton and had to learn the lyrics phonetically, he and Ahez have become defenders of the minority language spoken in the province of Brittany – a language threatened with extinction, since there are only about 200.000 speakers left.

Plunge
At the press conference following the win in France, Marine said, emotionally: ‘It is a language we’ve been ashamed of for so long, and now we’ll make it heard all the way to Turin…’
Sterenn added, just as moved: ‘It is a language that’s entitled to have a place in modern music. It is a beautiful language and it is our language.’
After which she turned to Alexis and said: ‘Thank you for wanting to plunge into this with us. For letting us plunge into your music.’ Alexis took her hand, and Sterenn raised her fist and spoke: ‘Long live the Breton language. To victory.’

Parallel world
And no, that did not come off as overconfident or rude. Because Alvan & Ahez are merely beginners. When asked how the song will be performed in Turin and whether they know what’s coming for them, Sterenn responded: ‘We have no idea. On stage we imagined ourselves in a parallel world. Luckily we are being coached well, so we’re secretly counting on others to teach us how to do it.’
Followed by Alexis mumbling to himself once again: ‘We’ve been so lucky…’

As part of the original founders of the Eurovision Song Contest France has been participating since 1956. The country was rather successful in its first 30 years, winning 5 times in this time frame: 1958: André Claveau performing Dors, mon amour 1960: Jacqueline Boyer performing Tom Pillibi 1962: Isabelle Aubret performing Un premier amour 1969: Frida Boccara performing Un jour, un enfant 1977: Marie Myriam performing L’oiseau et l’enfant France has forfeited the competition only twice since its creation, once in 1974 due to the death of the French president right before the festival. And again in 1982 as the French head of entertainment found the contestants to be of low quality. In the past twelve  years, France  – even though it is one of the ‘big five’, the countries thatpay the highest contribution to the European Broadcasting Union and thus can skip the qualification rounds – only managed to  reached the top ten twice.

Picturebook about Mercy OUT now