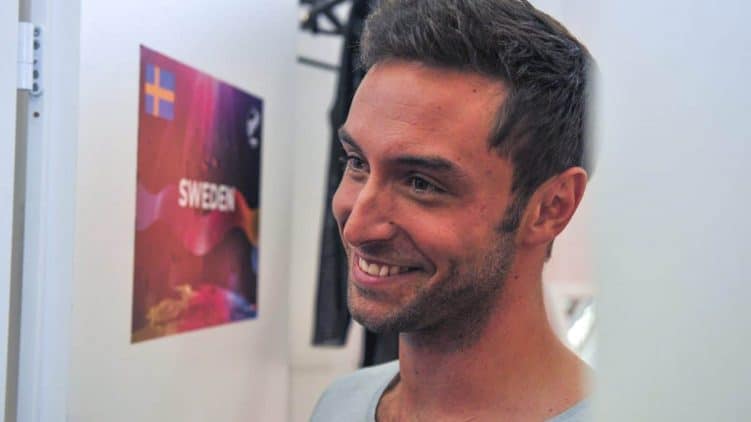 Måns Zelmerlöw: Chameleon The best lines of the new album

When he was 12 years old, Måns Zelmerlöw grew tomatoes and wore track bottoms. He wasn’t very popular, but eventually he was noticed and saved by a new friend. This story was the foundation for the visual presentation of Heroes, the song with which Måns won the European Song Contest 2015. As Zelmerlöw hosted the Contest in 2016, there is every reason to sail on high waves and forget about the depth. Still, he doesn’t refrain from the latter on his new album. Chameleon was released in December 2016 and is above all poppy, but do not underestimate the lyrics, many of which Måns wrote himself. ‘We won’t fall back to Earth tonight.’
The first track, Glorious, is about euphoria. Two hearts in victory, and: In this moment nothing matters. Well, actually it is not about euphoria, but about wishing for euphoria. The singer tries to persuade his intended lover to glory (or to sex, for those who prefer to see the desires reflected more simply). Your castle walls are made of hurt. I’ll tear them down with fearless love. But: she is hurt and all he has to offer is courage. This song is related to Heroes: it determines a goal (euphoria, victory, heroism) but shows some damaged edges as the goal has not been achieved yet.

‘There’s a hole in the soul of Happyland’
After the second track has sadly concluded what life – or love – is (‘a beautiful lie‘), cynicism grows even stronger in Happyland. We stay hide in our castles made of sand. And: I guess we all fucked up, welcome to Happy, Happy, Happy Happyland. Zelmerlöw did not write this song but is not the kind of artist that follows his own career without thinking so he must have chosen this song consciously. If Happyland was about the destruction of a relationship the writers would not have used the words ‘we all‘ so it is a complaint. Against modern society? Against the shallowness? Against war and destruction and hunger in regions that can hardly be called ‘Happylands’? The song does not answer these questions, but the melody is cheerful, just like the title, which makes the message even more urgent.

‘I see the man in the mirror. I’ll change him today.’
Meanwhile, track three has taken us to rock bottom already. How does this story continue? Via Round, round, an angry song about taking revenge after being dumped, we arrive at Whistleblower. Another bitter observation: we are the new generation and we must pay for all you left behind. But ‘if that’s what it takes’ I will be the whistleblower: the canary in the dark mine, noticing the carbon monoxide before anyone else does. Eventually, this song is about the need to be brave, just like the main characters in Heroes and Glorious: staring straight at the fire, never turning away.

‘Every time that you leave me I am loving it.’
Back to relationships. Hanging on to nothing is about an unhealthy love that keeps on burning, cannot be broken off. ‘I can’t seem to break free / From these chains that were made / Made just for me.’ And: ‘We try and we fall desperately’. But the lyrics are more layered. And more morbid. For the first-person narrator says: ‘Every time that you leave me I am loving it’. So this song is about one of those couples that are addicted to splitting up (and to coming back together again). The scars that are mentioned (I can’t hide the scars that we’ve been given) are wished for. The line ‘It’s unreal how we bleed’ may be painful but seems to be sung with some pride.

‘What the heart wants, the world pays.’
After Renegades (in which these lines are repeated several times: ‘We are renegades, renegades / Runaways, runaways / You and I will ride into the sun’) follows Primal, a proud cry, no: a brute cry. First the main character states: I spent a lifetime growing old – I was always in control – I was drying out, then he brings up the solution for this barren existence: we should be prouder than lions, roaring high above the crowd. And that is exactly what the first-person narrator does. Perhaps he even overdoes it a little: ‘And now the sun shines when we say / What the heart wants the world pays’. Textually, Primal is the best song on this album. Because of powerful sentences like ‘We’re loud and famous and we’ll never hide’ and because of the complex addition in the bridge of the song, which is repeated a couple of times: Find what you love and then let it kill you. Cause there is no other way. In other words: you have to be a lion, you have to learn how to roar, you must pursue happiness and the world should allow you to do so because – hey, come on – you are famous and you make noise – but meanwhile the songwriter knows, the singer knows, Måns knows that is exactly what will finish him. It will not make him happy. It will kill him. But there is simply no other way to live a life.

‘Did I just make you make the wrong decision?’
We will be thinking about that for a while. Meanwhile, Chameleon circles to an end with Zelmerlöws earlier single Fire in the rain (It’s because love we’re standing here today, we’re like fire in the rain) and with the last track, Wrong decision, which has particularly sad lyrics. It expresses the doubts after a broken relationship and, again, everything is phrased somewhat better than in average pop songs. Måns does not wonder if he has made the wrong decision, no, he wonders if he had the girl make the wrong decision. Even though she left him, he blames himself. ‘Never thought it would ever be easy / But not as hard as this’.