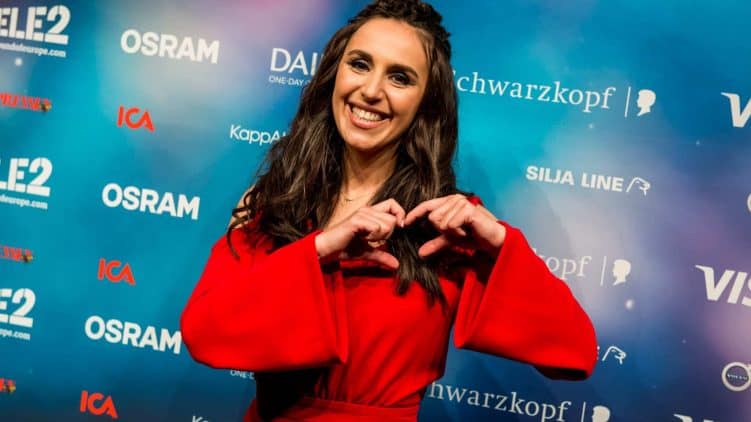 Jamala (1983, born as Susana Camaladinova in Osj, Kirghizia) is the singer that won the 2016 Eurovision Song Contest for Ukraine with her song 1944.

The song talks about the deportation in 1944 of the Crimean-Tatars (amongst which Jamala’s grandparents) by Stalin.

After the decline of the Sovjet Union Jamala’s family returned to Crimea. Jamala’s musical career went from opera to jazz, soul and pop music. She is one of the most known and influential artists of the contemprary Ukrainian music scene.

With her unique and different song 1944 Jamala brought the upcoming Eurovision Song Contest to Ukraine. The singer is known for her music, obviously, but also for expressing her opinion on matters that are important to her. We sent her seven difficult questions and Jamala was so kind as to mail us back the answers.

During Eurovision you had an extremely busy week, with a lot of talking. A lot of things about the contest were happy and cheerful. But your song lyrics are about a very serious matter. You have been explaining about what happened in 1944 in Crimea over and over again. How tiresome was your stay in Stockholm? Was it difficult for you to switch all the time from the serious and personal to the happy and cheerful?
I am very glad you can feel that shift. I wouldn’t wish signing an extremely sophisticated and dramatic song 1944 in between of happy and cheerful tunes to my worst enemy. That feels very uncomfortable. In order to set my mind on it, I had to cast myself aside completely. Experiencing the same emotion many times is very difficult. For 20 thousand viewers in the hall and 200 million in front of the TVs to feel what I was eager to convey to them, I had to immerse myself deeply. Every time I conjured my grandmother’s image, over and over again, those railcars, where my parents were deported in. I was nearly in her skin as I was singing everything about that.  Being a positive person, I like to laugh, say jokes, and dance. There are plenty of videos and photos from Stockholm, where we walk, laugh, ride on the carousel. But immersing was very exhausting for the whole body and mindset. Each rehearsal made me feel 10 years older. One month after the Eurovision, I felt like 23 years old again. That is not about the coquetry, it is about the fatigue scale. It seemed I got 10 years older every day. I was embracing that state. It was painful because my grandmother was not a fictional character, she really suffered through it all. After the Eurovision I started to understand the actresses, who take a break from work to restore their strength after dramatic roles.

More about Ukraine More from 2016

A previous Eurovision-winner we interviewed said: ‘One of the things you will always carry with you in your life after the festival is this golden glow – the feeling you were a number one.’ Do you agree on that? How has your mood been this last year? What are the lovely sides to winning Eurovision, and what is the difficult side?
I didn’t feel or don`t feel anything like that. What does it mean to be the number one? There are no second or third prizes at the Eurovision. There is only one winner, which is not even the artist, but the nation. One has to be mentally prepared for it. You are obsessed with the song, suffer, work tirelessly. But it is the nation and its culture that are victorious. Wherever I came, everyone asked, how the Eurovision could be held, while you have a war. And I told everyone: come to Kyiv and you will see for yourself that it is safe there.
I think the Eurovision is somewhat similar to the Olympics. As for the pleasant things – your nation gains popularity instantly, it gets into the center of attention, everyone talks about it. There is a downside, however, the performer happens to depend on the song that has won. Throughout the year before the next Eurovision, you become its hostage. It is rather boring. You want to sing new songs already.

In an interview-series called Ukraine’s Next Generation, which is a great initiative, you mention that you speak about Crimea and the Crimean Tatars whenever you can, on stage. You certainly did in Stockholm, reaching the largest audience you could get. Do you think you could help, through the Eurovision? What is the current situation in Crimea, what changed this last year?
I like to think that my song and its idea touched the hearts of the European audience. People learned about the Crimean Tatars, their history. But the song can protect no one, unfortunately. I like to think that music is able to help. Yet in Crimea, the arrests of the Crimean Tatars are still happening, searches, accusations without merit and suppression of any dissidence. It is a tragedy, a new tragic page in the history of the Ukrainian and Crimean Tatar people.

After the Eurovision you must have had thousands of personal reactions. Could you tell us about some reactions that stood out, that touched you the most?
I received thousands of messages! And plenty of gifts too!  A woman “gave” me a tree in the Peace Park in Athens, and the Dutch company StoKolex named a new kind of tulips in my honor. And I received a great number of paintings, poems and songs. Fans recorded their unique cover versions of 1944. I am very grateful to all my fans, they are very sincere, paying attention and noticing everything. And they fight haters off fiercely, protecting me from all sorts of attacks. That is very pleasing!

When talking to young people in Kyiv and Odessa, the first thing we noticed was: optimism and activism. Do you think that it is the right observation? How would you say the overall ‘temperature’ of young Ukrainians is, nowadays?
I think that Ukraine has got a very cool youth. We have many difficulties in politics, economics, we cannot defeat corruption. But the youth thinks differently. They travel a lot, are able to think, analyze and they are very difficult to deceive. They are truly free and many of them paid their price for it.

How, do you think, could the Ukrainian society benefit from having the festival in Kyiv again? What importance does the festival have, or do you think it’s just about music and nothing else? And what would be the difference in importance for Ukraine with the festival in Kyiv in 2005?
Over the last 12 years, the Eurovision got bigger and expanded geographically. Today, not only Europe takes part in the contest, but Australia as well and the show itself is broadcasted in the USA and China…
I feel that the most important thing is that people from various states are going to visit Kyiv. It is very good for the image of our state internationally. I have got a strong belief that Ukrainians shall show their hospitality and friendliness. I’d really like the Eurovision to give momentum both for the tourism and infrastructure development in Ukraine.

Listening to all of your songs and records we have been impressed by the variety: the jazzy parts, the soul, the modern rhythms. Did you have time this year to think about new songs, and if so, in what musical direction will they go? In other words: what are your musical plans?
I wrote plenty of new material. A couple of weeks ago we had our first session in the studio with an extremely awesome piano player from New York, we made some demos of several songs. It is too early to talk about anything specific, but the mood of new compositions will not feel like the previous records. I am changing, I discover new inspirations, I grow up. I reflect on fresh topics. It will be a new piece of music.
We also plan to release a new single I Believe in U, which I present during the Eurovision Grand Finals, live.
As for now, we do prepare a new program, which will be presented at the Kyiv Palace of Sports on May 12, just between the second semi-finals and the Eurovision finals. It is going to be something unbelievable. The company Front Pictures, which created the visuals for 1944 is going to make fantastic effects. There are going to be guests present and some musical surprises. For me, it is just as important as the performance at the Eurovision Song Contest.