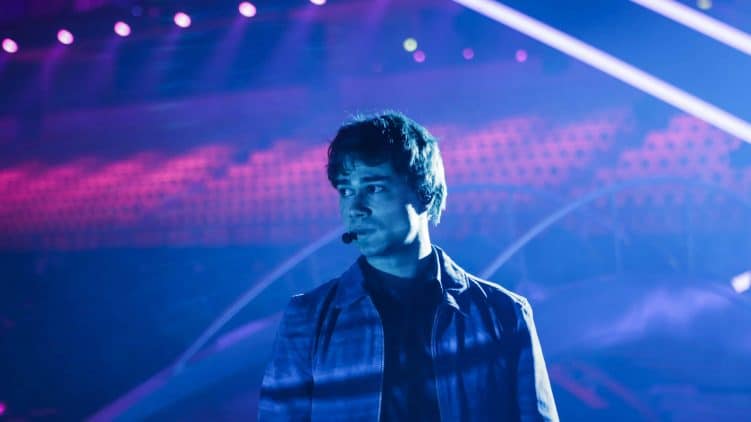 Will Alexander Rybak win the Eurovision Comeback Contest as well?

Alexander Rybak is back. The glorious winner of 2009 (Fairytale) is once again singing for Norway. A courageous step! Because absolutely everybody has asked him the same question over the past few months: why-why-why? And: you’ve already won-won-won once? And: do you think you’ll win-win-win again?

Which means that Rybak isn’t participating in just one, but two festivals next week. This year’s Song Contest (for which the bookmakers now place him second) as well as the Eurovision Comeback Contest. The latter encompasses the entire history of the Song Contest, because there are indeed several former participants who have tried their luck by coming back (some of them even twice): Rybak is the sixteenth. In the chart below, you can see how they did. The percentages are based on the number of participating songs in that specific year. What will Alexander Rybak’s position in this list be, ten days from now?

* Didn’t proceed to the final

And yet there are those who did worse. Below are all of the Eurovision winners who came back for a second attempt, but who never made it through the national finals.

Isabelle Aubret
participated twice for France (see above) and then tried many, many times to make a Eurovision comeback, without making it through the national finals.
In 1961 (even before her big win in 1962) with Le gars de n’importe où (2).
In 1970 together with Daniel Beretta with Olivier, Olivia (2).
In 1976 with Je te connais déjà (6).
In 1983 with France, France (3).

Grethe Ingmann
winner in 1963 (see above), tried participating in the Denmark preliminaries several times:
In 1978 with Eventyr (5)
In 1979, together with Bjarne Liller, with Alt er skønt (shared first place, became second after a recount)
In 1980 with Hej hej det swinger (3)

Séverine
after winning for Monaco in 1971 with Un banc, un arbre, une rue she tried it twice more, but for Germany. On both occasions, she failed to win the preliminaries.
In 1975 with Dreh dich im Kreisel der Zeit (7).
In 1982 with Ich glaub’ an meine Träume (10).

Vicky Leandros
sang in 1967 L’amour est blue, for Luxembourg, became fourth, returned in 1972 and won, with Après toi. After which she made one more attempt for the German preliminaries.
In 2006 met Don’t break my heart (3).

Abba
participated in 1973 in the Swedish preliminaries, back then as Björn, Benny, Agnetha & Annifrid with Ring ring (3). At which time one of their female vocalists, Frida, had already made a solo attempt.
In 1969, with Härlig är vår jord.
The men composed several song contest songs before participating themselves, but after winning the contest with Waterloo (1974) they did this just one more time, in 1975, for Svenne & Lotta: Bang, en boomerang, a song that Abba afterwards recorded themselves as well. As producers they were involved with the 1981 entry for Norway, Aldri i livet by Finn Kalvik, which came last during the contest with zero points. Interesting detail: on the recording of the song Agnetha and Annifrid are clearly recognizable as backing vocalists, but they never accompanied the artist to the Eurovision stage.

Johnny Logan
did not just win twice as a performing artist, but also participated as a composer in 1992, with Why me, sung by Linda Martin. This makes him the true Eurovision Champion.

Elisabeth Andreassen
is a true song contest fan. She participated four times in the finals. In addition to her performances as mentioned in the list above, she participated in 1982, before her victory, as part of the duo Chips, that performed on behalf of Sweden and became 8th with Dag efter dag.
And then there were a further eight less successful attempts. Five times she appeared in the Swedish national rounds, and three times in the Norwegian preliminaries.
In Sweden:
in 1981 as part of the band Chips with God morgon (2).
In 1984 with Kärleksmagi (4).
In 1990 with Jag ser en stjärna falla (7).
In 2002, as part of Kiki, Bettan & Lotta with Vem é de’ du vill ha (3).
In 2008 with Vaken i en dröm (8 in the semi-final).
In Norway:
in 1998 with Winds of the northern sea (2).
In 2003 as part of Kiki, Bettan & Lotta with Din hånd i min hånd (4).
In 2015 as Tor & Bettan with All over the world (4).

Emilija Kokić
was the singer of the Yugoslavian group Riva, who, rather unexpectedly, won the Contest in 1989, with Rock me.
She tried three more times after that, participating in the Croatian preliminaries.
In 2001, in a duet with Adalbert Turner-Juci, with Ljepota (2).
In 2003 with Zena od pepela (7 in the semi-final).
In 2006 with Andjeo (6).

Carola
won in 1991 and participated in the Contest again in 2006, but she’d also tried in 1983 with the song Främling (3)
And there were two more attempts:
in 1990 with Mitt i ett äventyr (2 in the Swedish national final).
In 2008 in duet with Andreas Johnson, with One love (didn’t make it through the second round).

Helena Paparizou
is the Greek singer who won the 2005 Eurovision Song Contest with My number one. She tried again in the Swedish preliminaries, almost ten years later.
In 2014 with Survivor (4).

Dima Bilan
won the Eurovision Song Contest in 2008 for Russia with Believe.
He tried again a few years later in the Russian preliminaries.
In 2012 in duet with Yuliya Volkova, with Back to her future (2).

What country is the Eurovision Champion Of All Times? [updated 2021]